LNER HAS introduced its Azuma trains to further new routes with the Hitachi-built trains taking over services to Aberdeen, Inverness and Harrogate. LNER began withdrawing its HSTs from mid-November, with all 14 diagrams due to end just four weeks later. The final regular passenger working for an LNER HST was due to be on 15 December, with the 17.05 Harrogate to King’s Cross planned to be the last southbound service and the 19.35 King’s Cross to Leeds the final northbound departure. 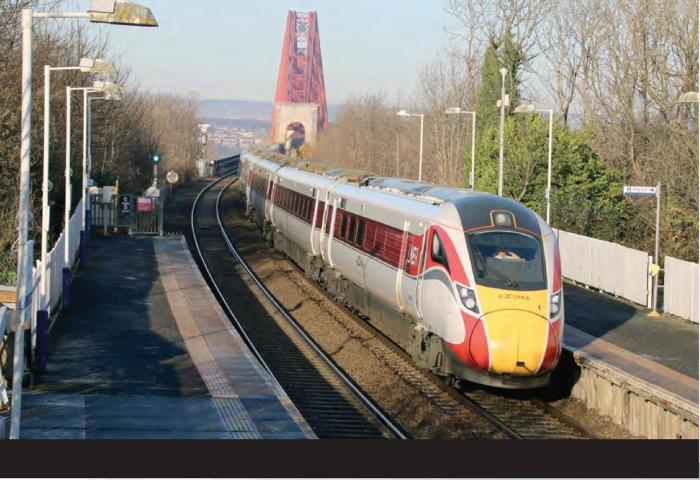 Iconic location: an Azuma comes off the Forth Bridge at Dalmeny on 30 November 2019 with the 09.52 working from Aberdeen.
Ian Lothian 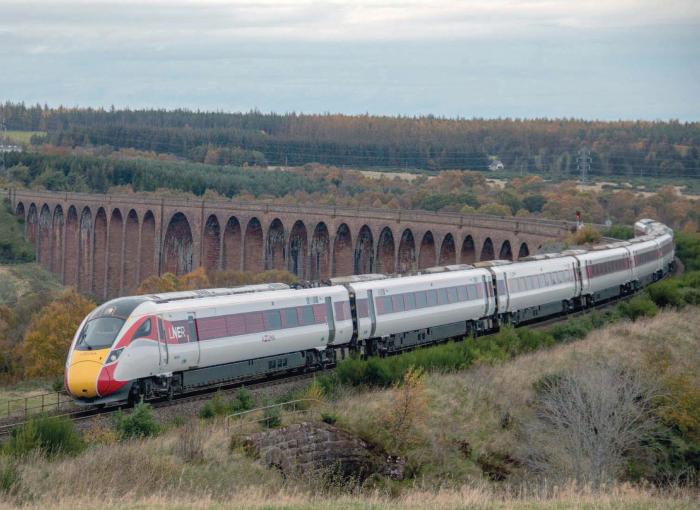 The replacement of HSTs has been enabled by LNER starting to accept Class 801/2 nine-car electric sets, with four accepted and three in traffic by late November, although some HST services entirely on electrified stretches switched to Class 91/Mk 4 sets rather than Azumas. The HST withdrawal plan was reshaped slightly following a collision involving bi-mode Azuma No 800109 at Neville Hill depot on 13 November (‘Moving Wheels’), with one diagram retained for an extra two weeks.

LNER also held a launch event on 3 December to mark the impending introduction of Azuma services to Harrogate. In addition to the pre-existing daily return service, from 15 December LNER added a further five return workings as extensions of London to Leeds services, providing a two-hourly service to the spa town. Bi-modes will be used for these services as the 18-mile stretch between Leeds and Harrogate is not electrified; two of the new services in each direction will also call at Horsforth.

LNER has accepted 12 of the 13 nine-car bi-mode Azumas, with the last, No 800101, due to follow in January, although No 800109 is now out of action following the Neville Hill collision. All 12x5-car Class 801 electric sets have been accepted; until the December timetable change eight had been used in daily service, with two on maintenance and two permanently based at Tyne Yard for coupling and uncoupling training, with these latter two pressed into service from the timetable change as part of the HST replacement. Acceptance of five-car bi-modes and nine-car electrics is set to continue over the coming months.

From the New Year LNER plans to pause Azuma introduction until February to allow time to get ahead with deliveries and provide greater certainty about acceptance. Withdrawals of Class 91/Mk 4 sets will then begin again, with the aim of operating a full Azuma service by June.

The next major timetable improvement for LNER will be extension of London to Leeds services to Bradford. As with Harrogate, this will involve enhancement from the current daily return service to a two-hourly frequency; LNER hopes these extensions can be introduced in May 2020.

AZUMA TAKES ON THE HIGHLANDS

Tuesday 9 December was damp and dark in Inverness when the inaugural Azuma service on the Highland main line began, seen off by a crowd of Invernessians and launched by LNER Managing Director David Horne, who introduced the Provost of Inverness Helen Carmichael. She spoke of the benefit the modern bi-mode trains would bring to tourism and that the services would enhance long-distance travel to and from the city. There was piping and drumming from the Pictish performers Clanadonia with whirling fire dancers leading the passengers up the platform to the head of the train.

On account of an incoming ScotRail service, Inverness was left in the dark two minutes down and the climb at 1 in 60 up to the Nairn viaduct was accomplished smoothly at 52mph. It was uphill to Slochd summit, passed in the dark, then downhill at 77mph to Aviemore. The bi-mode engines were quiet and the coach vibration free, unlike typical DMU experiences. The only stretch of the line passed for 100mph skirts Loch Insh and here the Azuma came close, reaching 97mph.

South of Kingussie, where there was another stop, the long ascent began to Druimuachdar summit at 1,486ft above sea level and the highest point on a main line in Britain. This was passed at 61mph. From Dalnaspidal down Glen Garry, the Azuma was smooth and fast, touching 75mph. Through Blair Atholl and by Killiecrankie speed fell back to 55mph before the stop at Pitlochry. Only when south of Dunkeld, with the climb through Kingswood tunnel behind us, did speed pick up as we were running seven minutes down.

It was now ‘catch up’ time and 81mph was touched by Murthly. The Azuma was still behind schedule at Perth, where the stormy weather that had beset the Lowlands was apparent. In pouring rain and with a gale blowing, passengers were picked up at Gleneagles, but adverse conditions lay ahead, although we bowled along over a rain soaked Strathearn at 87mph. The transition from motors to overhead electric power at Dunblane was imperceptible.

Stops at Stirling and Falkirk Grahamston were slick and the train soon zoomed through Linlithgow at 98mph. However, approaching the Almond viaduct, the Azuma slowed up, coming to halt at Newbridge Junction. Damaged masonry had fallen on platform 1 at Haymarket and the line ahead was blocked by a queue of trains. We were 15 minutes late at Waverley. 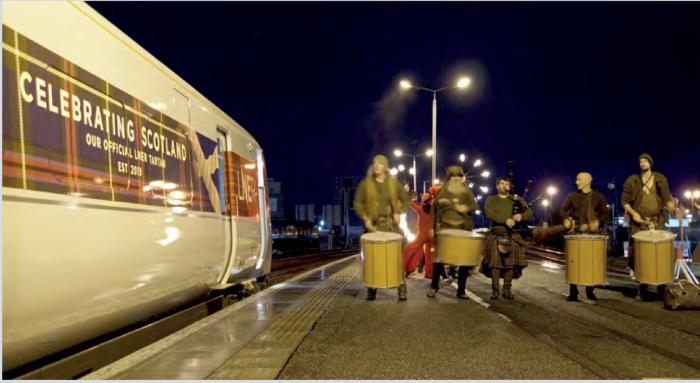 Gathering of the clans: warm Highland send-off for the Azuma.
Bruce Peter

The fiery launch in Inverness was splendid and, on a bleak December morning with bouts of driving rain, the train’s performance was admirable while the welcome on-board from LNER’s management and staff was well up to the standard of Highland hospitality.