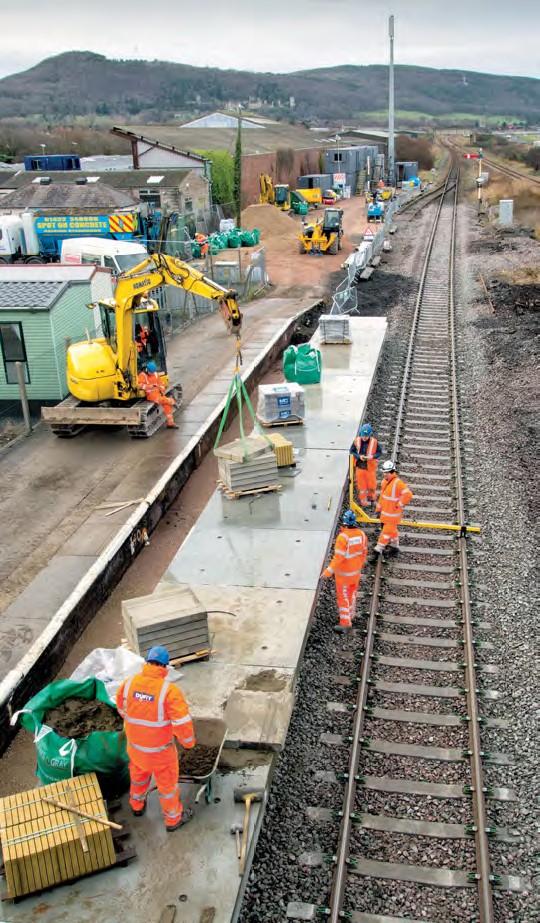 NETWORK RAIL has removed the down passing loop at Abergele and Pensarn station in advance of resignalling the eastern half of the North Wales Coast main line.

The loop was of little operational benefit and imposed a low approach speed on trains calling at the station. Network Rail considered relaying the track to provide a straight run past the existing platform edge but structures in the vicinity made this impractical. Instead, the platform is being extended across the ground previously occupied by the loop, using polystyrene blocks. Network Rail says that this material is a lightweight and innovative solution to the challenging ground conditions. The station is on low-lying land just inside the sea wall.

The work is due to be completed in the spring. In the meantime, no down trains can call at Abergele and Pensarn. A replacement bus service caters for passengers wishing to alight or board there.

The wider North Wales Railway Upgrade Project is due for completion in summer 2018. It includes commissioning of new signalling between Shotton and Colwyn Bay in spring 2018. Previously Network Rail had intended to renew the signalling as far west as Llandudno in this Control Period, followed by Llandudno Junction to Holyhead in CP6.

The upgrade project also includes installation of a new up loop at Mostyn (between Flint and Prestatyn), where preparatory work is in progress. The loop will be signalled bi-directionally and could be used to recess passenger or freight trains if necessary. It will be long enough for a 775-metre freight train, enabling any future workings to Mostyn docks to shunt into the sidings without impeding the main line. Rhodri Clark