CONSTRUCTION HAS begun on a new station at Maghull North, on the Ormskirk branch of Merseyrail’s Northern line.

The £13 million scheme is being funded through the Government’s local growth fund, Merseytravel and the Homes and Communities Association. The new station is expected to open in May 2018, with construction carried out by Network Rail and contractor Buckingham Group on behalf of Merseytravel.

Located between the existing Maghull and Town Green stations, it will be sited adjacent to a new development including 370 homes, with more planned for the area in the near future. Facilities will include a staffed station building and ticket office, passenger waiting facilities, step-free access to both platforms and a 156-space car park. The station will offer relief for the existing Maghull station, which is the busiest on the branch and whose car park is currently operating at a 95% occupancy rate. 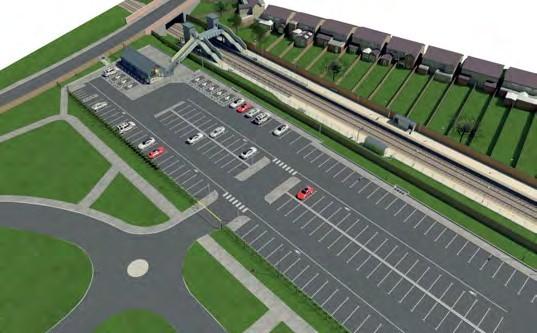 Merseytravel is also planning a new timetable when Maghull North station opens, as there is insufficient time in the current schedule to absorb the stop at the new station without impacting current train circuit times. The proposal is to adjust simultaneously service patterns on the Southport line to operate a clock face timetable on both routes. This plan would require the withdrawal of additional services currently provided on the Southport line; Merseytravel says loadings on the busiest peak trains are still projected to be within the limit specified in the operating concession. A full rewrite of the Merseyrail timetable is planned once the new fleet of Stadler EMUs has been fully introduced.