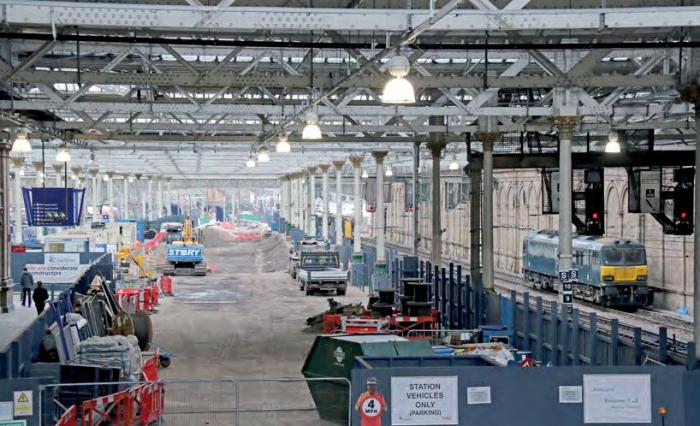 NETWORK RAIL has announced plans to create a masterplan to develop the long-term vision for Edinburgh Waverley station.

It says the masterplan will consider the future growth anticipated at the station, the impact of city centre developments on how people use it and how it can play its part in the continued success of Scotland’s capital city. Development is being led by NR and City of Edinburgh Council, which have formed a group comprising Transport Scotland, VisitScotland, Scottish Enterprise, Edinburgh Chamber of Commerce and other neighbouring property owners.

An initial study is expected to begin this summer, starting with examination of how future growth is likely to impact footfall within the station and on the streets outside. An options appraisal will be developed to consider short-, medium- and long-term objectives before wider consultation takes place. Annual usage of the station has doubled over the last 10 years to 24 million, and this is predicted to rise to 40 million by 2024. Meanwhile, Story Contracting has replaced Carillion as the main contractor for platform extension works at Waverley.

The work will extend platforms 5 and 6 at the east of the station to 275 metres in length in preparation for use by Virgin Trains East Coast’s new Class 800/801 ‘Azuma’ trains.

The extended platform 12, at the west end of the station, entered service in December and will be used by ScotRail’s new Class 385 EMUs on services to Glasgow. Carillion began work on the project in 2017, but the firm went into liquidation in January. Story had previously been subcontracted by Carillion to deliver elements of the works.