THE COST of delivering the first phase of the MetroWest improvements in the Bristol area may be up to three times higher than previously estimated. As a result, a staged introduction of passenger services on the reopened Portishead line is now planned.

The previous cost estimate given in September 2014 was £58.2 million, covering provision of a half-hourly service on the Severn Beach line and between Bristol and Bath as well as the reopening to Portishead. Network Rail’s latest estimate, reported to the West of England joint transport board, is that the works will cost between £145 million and £175 million.

Reasons for the rise in costs include a significant increase in the scope of work through the Avon Gorge to deliver the necessary linespeed to achieve the planned two trains per hour service, plus the impact of the increased service at Ashton Vale level crossing, the consequential impact on the amount of land and planning requirements and increased delivery risks.

The cost increase means there is now a shortfall in funding, and the report to the board gives three options going forward – to abandon the scheme, proceed as planned or to deliver the work in stages. The last option is favoured, with the plan being to deliver upgrades on the Severn Beach line and Bath Spa line by 2020 as originally envisaged. This would be followed by introduction of an initial passenger service on the Portishead line but at a lower frequency and without the envisaged linespeed increase, with the full 2tph service delivered later.

The work to reopen the Portishead line and provide for a half-hourly passenger service includes 9km of works to the Portbury freight line, which is still in place, including raising the linespeed of 30mph to 50mph to maintain capacity for freight trains as well as passenger. A further 5km of railway works will be required to the disused line on to Portishead. 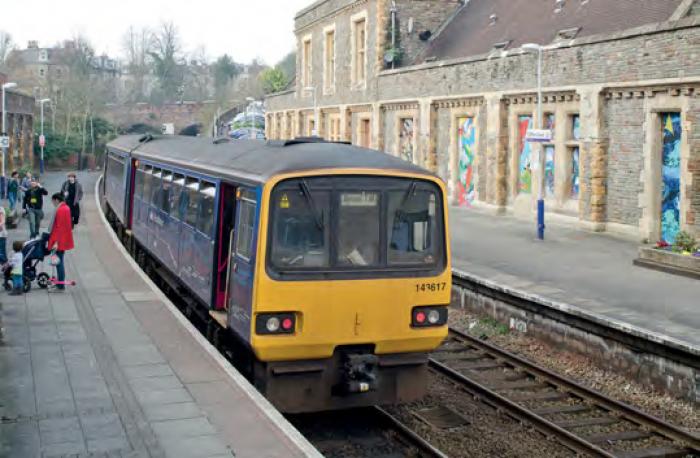 First in line for improvement funding: unit No 143617 calls at Clifton Down on a service to Avonmouth on 15 March 2011.
Tony Miles

Metro West Phase 2 proposes an hourly service on a reopened Henbury line with stations at Henbury and North Filton and along the Filton Bank, as well as a half-hourly service on the Yate to Bristol line, with opportunities to extend this to Gloucester being explored. This element is not reported to be affected by the funding challenges experienced by Phase 1, and delivery is still planned for 2021.

Network Rail is presently undertaking gauge clearance work for introduction of Class 165/166 DMUs cascaded from Great Western Railway’s Thames Valley services. Subject to this work being completed and completion of electrification as far as Maidenhead to release the units, GWR’s intention is to introduce the three-car DMUs on the Severn Beach line in July.