With the dominance of container traffic on the West and, increasingly, the East Coast main lines, it is easy to overlook the Midland main line as a freight route. Yet it is of critical importance, and its role is growing. As the Department for Transport consults on the new East Midlands passenger franchise, including the recent changes to the electrification programme, it becomes more important than ever to ensure freight can continue to thrive on this key axis.

Those of you who use the route on a regular basis will be accustomed to seeing construction trains moving up and down. Many of these originate at the large quarriesin the East Midlands, including Mountsorrel and Bardon Hill, which together dispatch somewhere around five million tonnes each year. Trains also serve the cement works at Hope, and in some cases the Peak District quarries. (As an aside, the East Midlands quarries produce granite, whereas the Peak District produces limestone, each with different uses. Granite has a particular use as rail ballast, and Network Rail is consequently a major customer of these quarries.)

There are a number of construction railheads along the route, including Luton, Wellingborough and Radlett. Delivered stone is stockpiled on site and sold out into the construction market, or made into asphalt or cement. Different grades of stone will be supplied for specific markets, meaning a single train may have a range of materials in its wagons.

These trains also serve construction railheads in the capital, including at King’s Cross itself, Greenwich and elsewhere. Along with similar flows from the Mendip quarries, it is estimated rail is supplying some 40% of all the construction aggregates used in London and the south east, supporting new housebuilding, office construction and infrastructure development. Each train, on average, carries enough stone for the equivalent of 30 houses, keeping up to 76 lorries off the road as it does so. 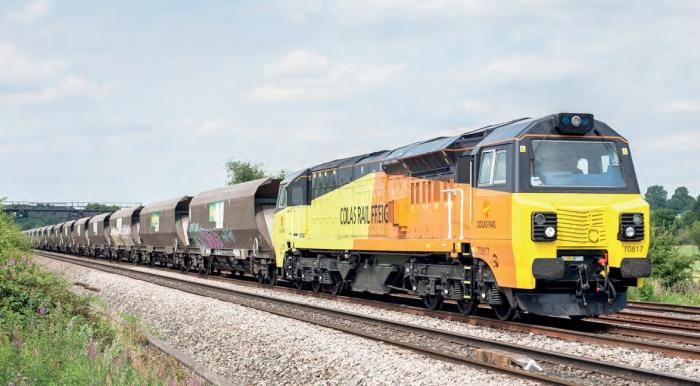 It is clear therefore that the smooth running of construction traffic is fundamental to supporting the economy of London and other conurbations. With increasing road congestion, and well-publicised issues with HGVs and cyclists in urban space, making more use of rail is a clear imperative.

Customers also want to use more rail, and have been investing for growth. Tarmac has a new and expanded wagon fleet, replacing older, less efficient equipment with new high-volume hoppers and boxes. The freight operators are also investing in equipment and terminals to serve this growing market, and are working with customers to increase train length and weight to maximise the use of each train.

The Midland main line is not all about aggregates and ballast though, and is likely to see more intermodal in future. The new strategic rail freight interchange (SRFI) at Kegworth is presently under construction, and Radlett still an aspiration – and one with planning consent. Although the Felixstowe to Nuneaton upgrade may be deferred, there remains pressure for any growth from the port to be routed cross-country in those paths which are available, crossing the MML in the Leicester area. And rail freight is also an important customer of the East Midlands supply chain cluster.

You might therefore expect the Department for Transport to promote the growth of rail freight on this route. If it does, you would be hard-pushed to find it in the current public consultation on the new franchise, which is wholly silent on the economic and environmental benefits rail freight delivers to the region. In fact, the only substantive reference comes in question 13, which asks ‘Would you like additional fast trains from London each hour to call at Luton Airport Parkway if this meant that, as a trade-off:

Some services are withdrawn from other stations, such as Luton?

Journey times to other stations may increase?

Freight capacity and/or frequency is reduced?’

This infers that Government is prepared to consider reducing the amount of freight moved to allow more passenger services to operate on the route. Putting to one side the matter of powers (DfT does not grant access rights), this suggestion has been met with consternation by freight operators and customers and those investing in wagons and terminals. We have had urgent discussions with officials, who assure us they do not wish to remove freight traffic, but have been unable to offer formal clarification of such.

This is a worrying position, and sets an unfortunate precedent for the freight railway. We can only hope the economic imperative of these services bears weight with those designing the future franchise, and that rail freight can continue to prosper on this all too important of routes.