REVISIONS ARE planned to the timetable for Elizabeth Line services that will see more off-peak services through the central section and increased frequencies west of Paddington. This will require Transport for London to procure four additional Class 345 trains from Bombardier. 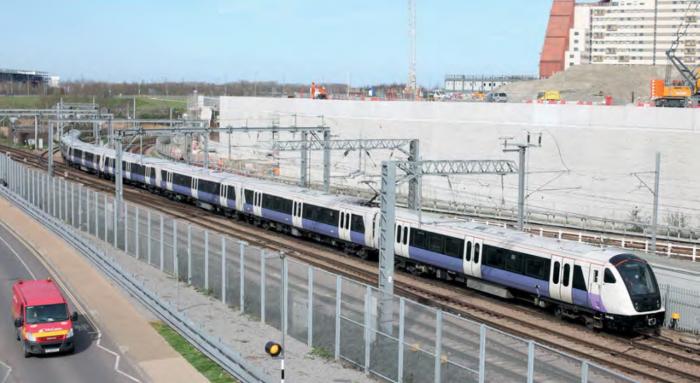 Four more trains to be ordered? Bombardier ‘Aventra’ No 345002 eases off the High Meads loop at Channelsea Junction while under test on 13 March 2017. The seven-car Crossrail EMU will be moving to Old Oak Common shortly for crew training on the Great Western.
Antony Guppy

The changes would be included in the December 2019 timetable, which will see the complete Elizabeth Line route in operation following a staged opening. TfL says the plan will make the most of the £15 billion investment in the Crossrail project and will support robust performance, and has a benefit-cost ratio of 13.9:1. The changes were due to be approved by the TfL board on 29 March.

The previous plan was for a peak frequency of 24 trains per hour (tph) through the central section, with 16tph running at off-peak hours, but TfL plans to raise the off-peak frequency to 20tph. These would comprise additional services from Paddington to Shenfield and Abbey Wood.

The previous timetable iteration provided for 10tph west of Paddington at peak periods and 8tph off-peak, comprising 4tph to Heathrow, 2tph to Maidenhead, 2tph to Reading and 2tph to West Drayton (peak only). TfL plans to raise this frequency to provide ‘a train approximately every five minutes’ west of Paddington at peak times, with the aim of providing a regular interval of trains.

The infrastructure and depot facilities can support this increase, but four additional Class 345 EMUs will be required; the current order is for 66 trains, with options for up to 18 more to be added. Adjustments will be required to Great Western Railway services on the relief lines between Paddington and Reading, removing five services in both the morning and evening peak planned to operate with a semi-fast stopping pattern.