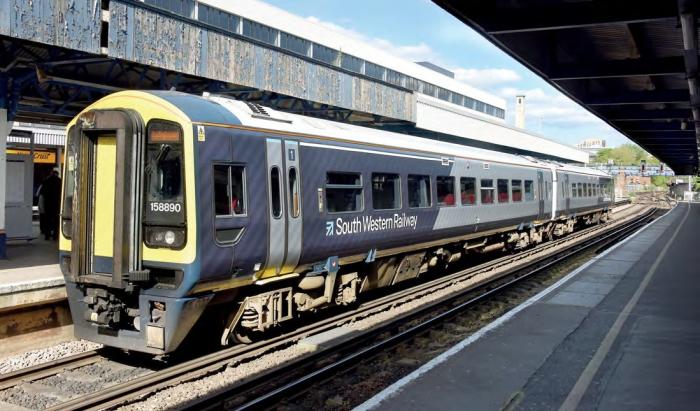 Forlorn awning (reality dawning): South Western Railway’s No 158890 calls at Southampton Central on 10 May 2018 with the 16.07 Romsey – Salisbury via Eastleigh and Southampton. Colin J. Marsden

THE LONG-TERM decline in operational performance on the South Western Railway network is due to a multitude of factors, according to a report by former East Coast Chairman Michael Holden. In the analysis, carried out by

Mr Holden in conjunction with Atkins, it is noted that Public Performance Measure (PPM) Moving Annual Average (MAA) fell from 93.9% in January 2011 to 84.2% in March 2018. This is despite the timetable remaining largely static over this time, with the only substantial change being longer trains on suburban services.

The most significant PPM fall of 6% occurred in the two years to April 2018. The report notes the increase in delay minutes has been driven by growth in reactionary delay, suggesting the railway has become harder to operate. Mr Holden’s report suggests the deterioration in performance is due to factors that have affected timetable resilience. These include:

■ the impact of defensive driving behaviour;

■ a shortage of fully trained drivers and heavy dependence on free day working;

The report places particular emphasis on the loss of operational expertise and control and command capability in the control function before and after the move of SWR’s control to Basingstoke. It is also suggested the major works at Waterloo during summer 2017 to lengthen suburban platforms for 10-car operation have further reduced flexibility, with 10-car working introduced without ‘commensurate infrastructure upgrades required for perturbation’ and with insufficient stabling facilities for the new Class 707 fleet.

Another important factor highlighted by Mr Holden is a degradation in service recovery capability, driven by loss of capability to control train crew during disruption and a shortfall in compliance with the driver and guard route and traction knowledge matrix, along with inadequate knowledge of diversionary routes and depots.

‘Organisational turbulence’ over the last eight years is suggested as a causal factor, distracting attention from day-to-day operations. The report highlights misalignment of objectives between the franchisee and Network Rail, whose targets are set by different bodies (the Department for Transport and Office of Rail and Road respectively). Ineffective performance management is seen as another important issue, with the report highlighting ‘the paucity of effective performance management information provided to key managers and directors’ within both SWR and NR.

In terms of infrastructure reliability, Mr Holden’s review notes a near threefold worsening in delay per incident (DPI) from non-track asset issues, despite the number of delay incidents falling. For track, the number of incidents remained broadly static, with DPI showing a similar adverse trend.

The prevalence of emergency and temporary speed restrictions on the network is seen as a key cause of the performance decline. The report suggests the under-renewal of key assets is ‘not a viable longer-term strategy’ and proposes amended overnight access arrangements on key routes to allow NR to improve the productivity and efficiency of this work.

The report notes the introduction of the new homogenous Class 701 suburban fleet and implementation of driver control of doors could help improve performance. This features among 28 recommendations across the areas of performance management, contracts and relationships, train operations, infrastructure maintenance and renewals and control and resourcing.

However, it is not considered possible with the current infrastructure and operational parameters to restore the level of resilience seen when the timetable structure was introduced in 2004 unless fewer trains are run at peak times. Therefore, a range of track layout and signalling revisions are also suggested which could provide resilience to the timetable; many would also improve capacity and allow additional trains to run.