MARITIME TRANSPORT has launched two new services from London Gateway to Trafford Park and Wakefield. The services, hauled by DB Cargo, began on 24 June. These are Maritime’s fifth and sixth services to begin since Maritime Intermodal was launched in April. The two services are hauled by Class 66 locomotives wearing Maritime’s livery, and operate from Mondays to Fridays on exports services and Tuesdays to Saturdays on imports.

The purchase will see three second rail reach stackers stationed at Maritime’s new terminal currently under construction at East Midlands Gateway (p24), due for completion in November, with two H9 reach stackers at its terminal in Tilbury. The five single and double empty container handlers will be distributed across Maritime’s other terminals, replacing some of its original fleet whilst adding to its new and existing operations; all machinery is expected to be fully operational later this year. 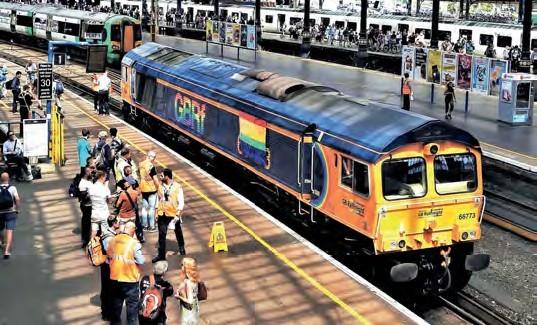 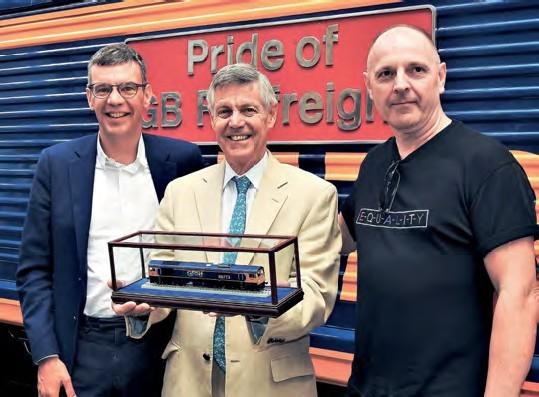 First freight trainbow: on 2 August 2019, GB Railfreight named No 66773 as Pride of GB Railfreight at Brighton station on the eve of the Pride weekend festivities in the city. The loco was repainted at Eastleigh Arlington works and named by journalist and former MP Matthew Parris (inset, centre) and his partner Julian Glover alongside GBRf Engineering Director Bob Tiller (right), local councillors and dignitaries. GBRf says the loco recognises LGBT+ employees across the rail industry and celebrates the operator’s ongoing commitment to ensuring diversity and equality in the sector. John Vaughan

Rail freight is a ‘10%’ sector. It moves around 10% of surface freight transport in the UK and accounts for just under 10% of all trains on the network. So it’s perhaps not surprising that people don’t always understand the freight sector as well as they do the passenger sector. This gives rise to some commonplace myths – but what is the truth? We check out some common misconceptions…

The railways were built for freight; in the 1950s rail was moving twice the volume it is today, some 40% of the nation’s trade. The deregulation of road freight from the 1960s had a significant impact, and rail volumes began a gradual decline towards the lows of the 1980s and 1990s. Indeed, rail freight was privatised on the assumption of continued decline. Most recently, Government energy policy changes caused coal movements, one-third of the business at the time, to be lost almost overnight. Yet time and again the freight operators have reshaped their businesses, focusing on new and different markets, and last year again saw a return to overall growth, up 3% on the previous year.

The key markets of construction and intermodal have fared even better than the average, increasing by 120% and 90% respectively over the last two decades. With increasing road congestion, HGV driver shortages and a renewed focus on the environment there are strong forecasts of continued growth too. Rail freight is changing, but it certainly isn’t dying.

Now it is true that the economics of rail freight generally work best over longer distances, but it is not the case that shorter-distance flows cannot work. Over time there have been plenty of examples of this, from inter-work movements for the steel industry to short-distance container trips in Scotland. The new service from Teesport (near Middlesbrough) to Doncaster is only 80 miles long, but is still proving economic for its customers, Ikea and Containerships. The key to making short-distance flows work is high asset utilisation – GB Railfreight has found a way to get two complete turns out of the wagon and locomotive over 24 hours, significantly reducing the rail costs and increasing productivity. With this focused approach we might expect to see more shorter trips in future, driving continued efficiency for customers.

MYTH – FREIGHT IS A MAJOR CAUSE OF PASSENGER DELAY

Every part of our industry has a duty to improve performance and freight is no exception. But it is frustrating to hear claims that freight is a major cause of delay when, according to the Rail Delivery Group, freight accounts for only 2.5% of passenger delay across the network. Network Rail related freight performance stands at 95.2% and the moving annual average has improved significantly over the last six periods or so too. Of course, every minute of delay is a minute too much, but freight is continuing to play its part in improving performance for all.

With increasing road congestion and pressure on air quality in cities, getting rail freight into city centres seems like a no-brainer, and many question why it is not happening. Well it is! For the retail and parcels market the current operations are small scale, making use of space on passenger services into St Pancras and Paddington, but new players such as Rail Operations Group have big plans to expand this in coming months. Yet every day rail freight delivers huge volumes of construction materials into cities across the country. We estimate that moving construction materials by train removes 4,000 lorry movements a day in London and around 900 in Manchester. That helps build new schools, flats and infrastructure so desperately needed in our cities – and in future projects such as HS2 and Crossrail 2. Rail is a fundamental part of cities already, with more to do.

A RAIL freight study produced by England’s Economic Heartland has called for the use of rail freight in the region to be maximised, with a corridor approach to planning and delivering additional capacity, capability and route availability on key routes.

EEH represents the growth corridor from Oxfordshire to Cambridgeshire and is seeking to become a sub-national transport body and implement its own transport strategy. Among the opportunities highlighted in its freight study is the potential for more freight terminals in the region, with the report noting there is only one active Strategic Rail Freight Interchange (SRFI) in the EEH area – the Daventry International Rail Freight Terminal (DIRFT). Corby, Swindon and the Ministry of Defence site at Bicester are suggested as possible development locations for additional terminals.

While East West Rail has been specified to W12 loading gauge, the study expresses concern around a lack of capacity for freight trains, with current planning only accommodating existing demand, thought likely to be one freight path per hour in either direction. It highlights the potential for growth to and from the waste facility at Calvert, the potential for existing traffic to divert via EWR and for construction and intermodal growth.

The study also notes the importance of released capacity on the West Coast main line once Phase One of HS2 is completed and the need to provide more routes capable of accommodating 775-metre-long trains.

Tilbury to Grangemouth link made permanent

FORTH PORTS has made its regular weekend link between the ports of Tilbury and Grangemouth permanent, following a successful trial period.

The service is run in partnership with Direct Rail Services and Eddie Stobart, with capacity for 36 containers. The service became permanent from 9 August. In the northbound direction cargo includes retail goods, food and drinks, while on the return journey it includes export of spirits, chemicals and fresh food from Scotland.

Dead of night: in the early hours of 17 July 2019, Freightliner tested the operation of a jumbo aggregates train weighing 4,624 tonnes. The trial to test the haulage capabilities using a Class 70 took place between Merehead in Somerset and Acton in west London; ‘70’ haulage will displace the Class 59 locos currently used by Mendip Rail on the service. 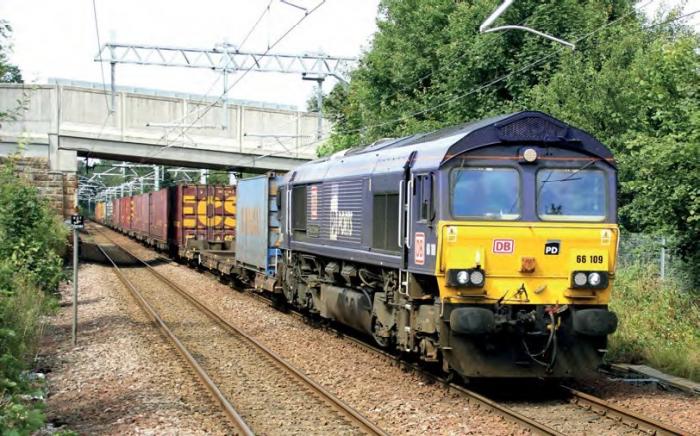 Rail freight is nothing without terminals – they are our equivalent of passenger stations. Different terminals operate under a range of commercial models, and there is sometimes a suggestion that rail is just a ‘fig leaf’ to get planning permission. Yet whilst a handful of locations have struggled there is little evidence that the rail links are unused. The new site at iPort Doncaster which opened last September already has four daily services, Daventry sees a dozen daily trains, and many bulk terminals are at or near capacity.

So, rail freight may not always be what it seems, and despite the challenges discussed each month in this column it continues to change and develop. Myths truly busted.

An opinion column of the

The Castle Donington freight-only line runs to the south of Derby, joining the Midland main line at Sheet Stores Junction (near Long Eaton) to the North East – South West main line at Stenson Junction. As reported in the July issue (‘Trackwatch’, p92) a new junction has been created on this line at a point just east of Castle Donington, near to the village of Hemington. Known as Gateway West Junction, it connects to a new line serving the Strategic Rail Freight Interchange (SRFI) terminal located within the SEGRO East Midlands Logistics Park, currently under construction. This 700-acre facility is due for completion in December 2019. It will consist of 11 large units offering six million square feet of accommodation. Its location is crucial, as it is abuts:

• East Midlands International Airport to the south; • Junction 24a on the M1, which connects to the A50 and A453 trunk roads, to the east; and • the Castle Donington freight-only line to the north. The SRFI terminal, which will be operated by Maritime Transport, occupies a 22.5-acre site located between the main logistics park and the M1, with the connecting line curving through approximately 90 degrees from the junction and running for around two miles alongside the eastern boundary of the complex and the M1 motorway. It consists of separate arrivals and departure roads and is designed to accommodate up to 16 freight trains of 775-metre length daily.

It also includes storage capacity for 5,000 TEUs (twenty-foot equivalent units, a measure of containers) as well as a designated area for lorry parking.

A new 20,000 square foot purpose-built office on the site will become the headquarters of the new ‘Maritime Intermodal’ division, the recently announced partnership between Maritime Transport and DB Cargo.

Initially, a constraining feature could be that it is only directly accessible for eastbound trains from Stenson Junction; a possible solution to this could be the use of the nearby under-used Castle Donington sidings, which offer a facing connection for westbound services from the Sheet Stores Junction direction. This facility was originally provided to serve the large Marks & Spencer distribution depot that was built on the site of the old Castle Donington power station, but the sidings have seen little use since being laid. However, they do now offer an excellent run-round facility for workings into the new SRFI terminal.

In Phase 2 of the SRFI development, there are plans for the provision of a Gateway East Junction to allow services to run towards Sheet Stores Junction directly. John Whitehouse 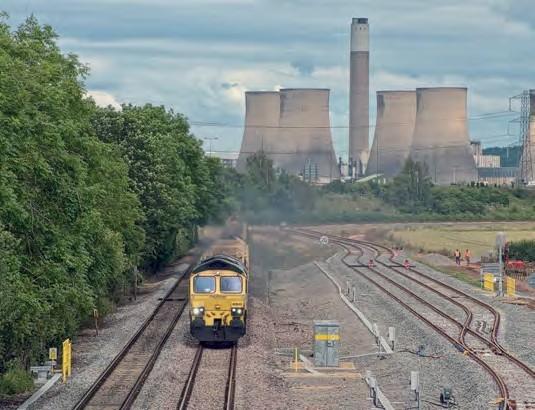 SRFI link line: the connection to the new terminal can be seen curving away sharply to the right in the middle of the photo. This view was taken looking east on 10 July 2019, with Ratcliffe power station forming a backdrop as Freightliner Class 66/5 No 66542 approaches East Midlands Gateway West Junction with working 6K50, the 15.13 Toton North Yard – Crewe Basford Hall departmental service. John Whitehouse 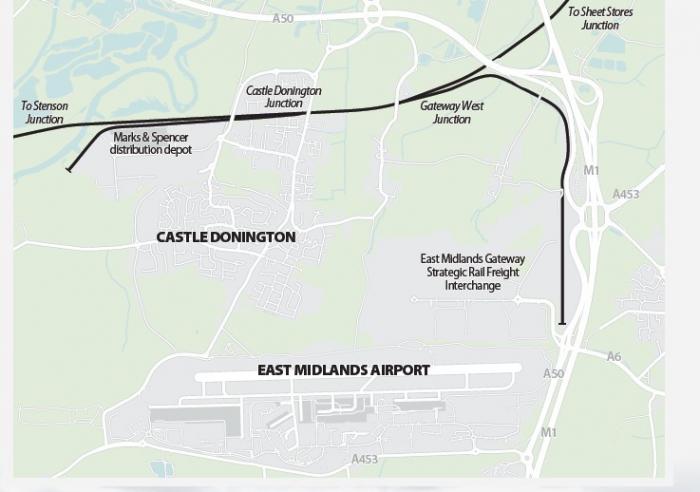 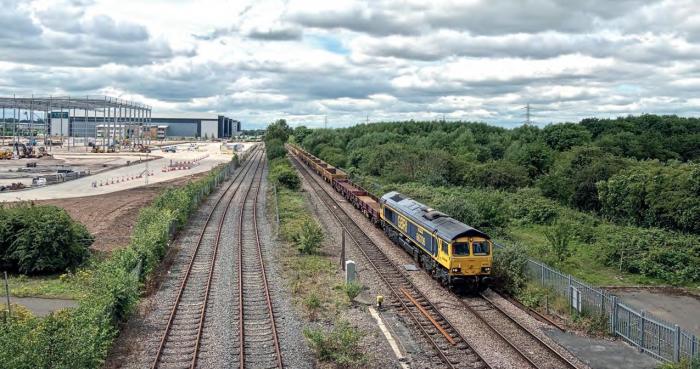 Castle Donington sidings: these tracks were installed to serve the giant Marks & Spencer distribution depot, which stands on part of the site of Castle

Donington power station. They could provide a run-round for trains serving the SRFI at the nearby Gateway Logistics Park. Passing on 10 July 2019 is GBRf Class 66/7 No 66706 Nene Valley with 6D44, the 11.09 Bescot Up Engineers Siding – Toton North Yard working. John Whitehouse