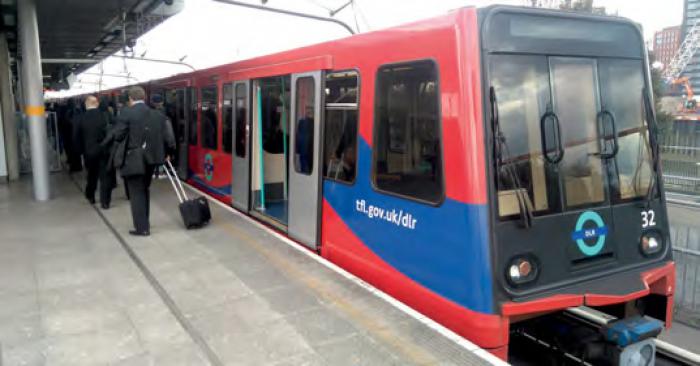 Due to be replaced: B90 stock at Canning Town.
Philip Sherratt

TRANSPORT FOR London intends to award a contract for a new fleet of 43 trains for the Docklands Light Railway in July 2018. Details presented to a meeting of TfL’s Programmes and Investment Committee indicate that the new fleet would be introduced between June 2022 and June 2024, with options for further vehicles to be added to the order.

Thirty-three of the new trains would replace the 70 B90/92 trains currently in use on the DLR, which TfL says are life-expired, and a further 10 would be used to enhance services in the Royal Docks area. TfL says the current DLR fleet, which also includes more modern B2K and B07 vehicles, is delivering a mean distance between service affecting failures (MDBSAF) of between 5,000 and 8,000km, which is ‘very low compared to other TfL fleets’.

Whereas two or three vehicles are presently coupled together on DLR services, the new fleet would provide fixed formation walk-through vehicles as long as a current three-car unit.

This would alleviate issues caused by splitting of trains into individual vehicles, as well as contributing towards a 10% increase in passenger capacity. Life extension of the B90/92 fleet was considered but found to be unaffordable and impractical, as six vehicles at a time would need to be taken out of service to deliver the work within a three-year period.

The new fleet would offer real-time information screens, climate control and mobile device charging points, and reliability of 50,000km MDBSAF has been specified by TfL.

The depot at Beckton would need to be expanded to accommodate a larger fleet, including additional sidings and a new maintenance building, with TfL planning to let a design and build contract for this work in November 2018 with the work complete by March 2021. The new fleet will also need to integrate with DLR’s existing signalling systems.

TfL has drawn up a draft technical train specification and says it has held meetings with seven manufacturers, while a further two have shown interest in the project. Vehicles will need to be able to fit within the DLR’s existing infrastructure, determining factors such as length and weight. TfL says it has reduced its MDBSAF reliability requirement from 85,000km to 50,000km following a study that concluded that at the higher figure costs would increase significantly ‘in return for very little reliability gain specifically for DLR’. Procurement is planned through a manufacture and supply agreement, with the DLR franchisee responsible for maintenance and a separate fleet support agreement seeing the manufacturer offer technical support and supply spares.

The trains will be financed by a lease, which would be subject to a separate procurement process. Each train will be paid for by the lessor as it becomes available for use, with TfL then planning to purchase the fleet from the lessor in the next Business Plan period. This is because outright purchase within the timescales required is considered unaffordable, and deferral of procurement to the next Business Plan period would mean the fleet could not be delivered until 2027. A financial contribution from London City Airport is committed to the project through a Section 106 agreement.

A traditional leasing agreement was ruled out due to the bespoke design of the trains, which would not be transferrable to other systems. The contract would include options for additional trains.

An initial six would allow further development in Lewisham, the Isle of Dogs and South Poplar and the Olympic Park by providing 15 trains per hour (tph) on the Stratford to Lewisham route by 2032. Further enhancements could see the overall DLR fleet grow to as many as 135 90-metre-long trains by 2050, supporting a 36tph service and extensions to Barking and Abbey Wood; the current fleet of 28-metre trains comprises 149 vehicles.