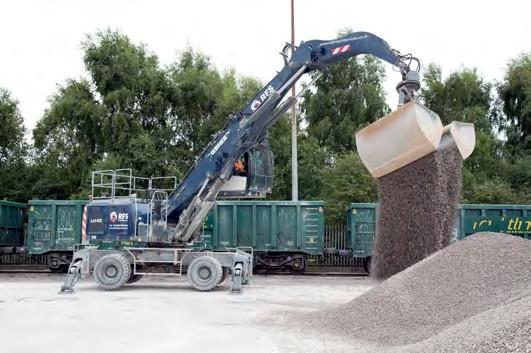 Aggregates for Merseyside: the new Tarmac facility in the Freightliner yard at Garston
Courtesy Freightliner 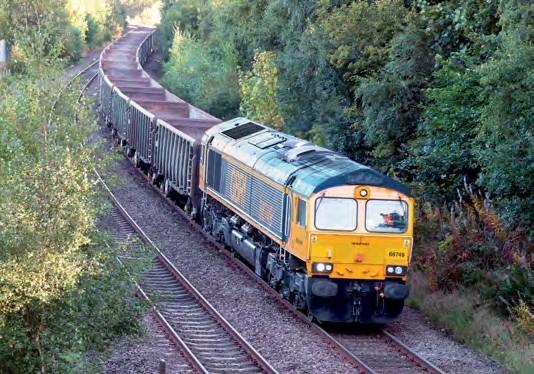 Waste working: GB Railfreight has a new 10-year contract with Biffa moving waste material from Collyhurst Street (Manchester) to Roxby Gullet (Scunthorpe). This is No 66749 approaching Brighouse on 5 October 2017 with working 6M59, the empties from Doncaster Down Decoy to Collyhurst Street
Russell Wykes

In our regular column, we often take the opportunity to discuss railway policy and its implications for freight. There is certainly plenty of it to go at, but sometimes it is also worth reflecting on why getting policy right is so important. With the right measures in place, rail freight operators are increasingly able to offer the services customers want, which in turn leads to growth, and more lorries being kept from the congested road network.

It was of course the changes in energy policy and the decline of coal that dominated the recent years, but the latest statistical release from the Office of Rail and Road showed total freight moved to have levelled when comparing Q1 2017/18 with the same quarter the previous year (see story opposite). With coal continuing its slide, down another 4% over the period, this means continued growth in other markets which is now starting to close the gap.

The quarterly statistics are not always a good indication of the overall trend; for example, the 1% dip in intermodal is likely to be influenced by the relatively late Easter in 2017, which meant fewer trains will have run over the period. Nonetheless, comparing the results with the anecdotal evidence does suggest there remains good market appetite for growth, and that the operators are responding to this with new services. The rail freight market is constantly evolving, and not every new train gets to make the headlines. In recent weeks, however, there have been a number of new developments announced, including several for new to rail businesses.

In the construction sector, Cemex and DB Cargo have started a new route between ABP’s Port of Cardiff and Acton. Running with 34 wagons (compared to a usual maximum of 21 on this route) the ‘jumbo train’ is double-headed to ensure it meets the necessary performance specification. The service is conveying limestone from Cemex’s quarries at Wenvoe and Taff’s Well, which is used to make concrete and asphalt for the London construction trade. This is the latest in a series of new developments for Cemex, which is acting to increase significantly its rail-borne volumes.

Tarmac, meanwhile, has continued to expand its own rail network, opening a new terminal at Garston, located within the existing Freightliner site. The new location enables rail-served products to be distributed to customers in the Liverpool region, reducing road journeys from the Peak District and East Midlands quarries.

Staying in the Liverpool region, Peel Ports has announced it is looking to launch a new containerised service from the new ‘Liverpool2’ facility later this year. Although the full details have not yet been announced, it is expected the train will operate to terminals in the Midlands. The involvement of the port in launching the new route mirrors the approach of Teesport on the East Coast, whose train to Scotland was launched last year.

Elsewhere, Armitt Group, a Liverpool-based steel logistics company, has recently opened its new rail-linked facility at Thamesport. The custom-built warehouse has been specially designed for high grade steel products, which are a demanding product to handle and store. The first train was moved from South Wales by DB Cargo, conveying steel coil for onward shipping, but the long-term aim is to link the site to similar facilities in the Midlands and North West, which can be used for exported and imported steel. Meanwhile, ArcelorMittal and DB Cargo ran a trial train of steel from Port of Boston into Wolverhampton Steel terminal, a site which is undergoing significant upgrade.

GB Railfreight has started operating a movement of waste from a new (re-activated) terminal at Manchester Collyhurst Street to Roxby Gullet, near Scunthorpe, for customer Biffa. The long-term contracts for waste management mean this can be a difficult sector for freight operators to get into, and so this is an important step with long-term potential.

Another waste commodity, glass cullet, has also been moved by rail from Port of Tilbury to Cheshire for reprocessing. This is a good example of ‘recycling’ – the previous intermodal terminal in the port has been redesigned for bulk products as Freightliner has consolidated its intermodal services at London Gateway. This marks the first stage of the port’s plans to develop its rail presence, from both the existing terminal and also the new Tilbury 2 extension which is going through pre-planning ahead of a formal application for development consent next year.

Whilst these smaller flows may not reflect a ‘revolution’, they show that rail is continuing to attract new users, and that existing customers remain keen to expand. Each percent of growth is hard won, but these new routes show it can be achieved, and must continue to be achieved over the remainder of this year and beyond.

Polished up for the photographer: loco No 66192 heads the trial DB Cargo steel working from Boston to Wolverhampton.
Courtesy DB Cargo