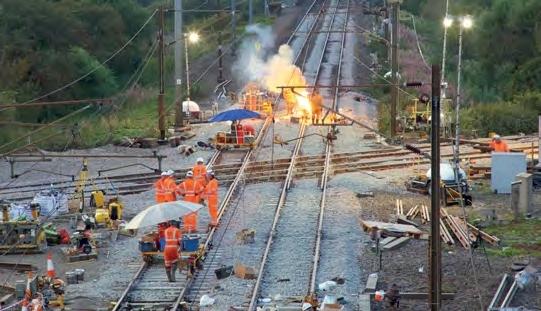 Welding up: the final stages of work on renewal of the Newark flat crossing on 26 August 2019. Jamie Squibbs

MAJOR WORKS on the East Coast main line over the August bank holiday weekend were successfully completed by Network Rail. The lynchpin of the work was replacement of the flat crossing at Newark, where the ECML crosses the Nottingham to Lincoln line, with this work taking place across the three days of the bank holiday weekend. The blockade also saw upgrading of signalling at the southern end of the route, with re-control from King’s Cross Power Signal Box to York Rail Operating Centre (ROC).

Other work included overhead line improvements and progress with installation of a new bay platform at Stevenage for terminating trains from the Hertford loop. NR says further closures as part of the East Coast upgrade are planned from early 2020.

Elsewhere, the August bank holiday saw replacement of track on the West Coast main line between Bletchley and Leighton Buzzard and between Adlington and Cheadle Hulme in Greater Manchester. In Anglia overhead line structure replacement continued on the Southend Victoria line, along with work connected with the London Overground extension to Barking Riverside and the installation of new track between Camden Road and Willesden Junction on the North London line.