EXTENSION COST RISES TO ‘UP TO £1.2 BILLION’

TUNNELLING FOR the extension of the Northern Line from Kennington to Nine Elms and Battersea is to begin in March.

Battersea is to begin in March. However, the cost of the extension is now predicted to be ‘up to £1.2 billion’, higher than the previous £1 billion estimate. This amount had been fully funded by the private sector through a package that includes the creation of an Enterprise Zone from 2016 for a period of 25 years. These contributions will be used to repay a £480 million loan from the European Investment Bank, which is covering nearly half the cost. However, significant changes to the proposed development above the station at Battersea mean a revised station design will be needed, leading to an increase in cost that TfL is seeking to recover from the developer. 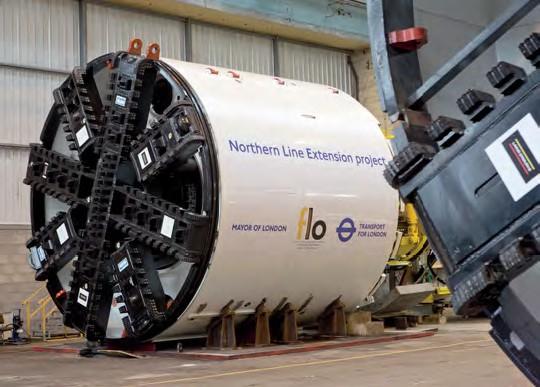 TBMs get to work: the French-built boring machines for the Northern Line extension.

The news follows the unveiling of two 650-tonne tunnel boring machines (TBMs), which will create the two 3.2km-long tunnels. The machines have been named Helen and Amy in honour of the first British astronaut, Helen Sharman, and British aviation pioneer Amy Johnson, who was the first female pilot to fly solo from Britain to Australia.

The TBMs were manufactured by NFM Technologies in Le Creusot in France and were shipped to London and reassembled in Battersea. The extension is being built by Ferrovial Agroman Laing O’Rourke.

Tunnelling is expected to take six months, during which time more than 300,000 tonnes of earth will be excavated; each machine can tunnel up to 30 metres per day. This will be passed along conveyors before being loaded onto barges and taken to East Tilbury in Essex, where it will be used to create arable farmland.

The extension is expected to open in 2020, and will see Charing Cross branch services from the Northern Line extended from Kennington to Battersea. It is predicted to support the creation of up to 25,000 jobs and more than 20,000 new homes.