NORWICH IN 90 SCHEDULES IN MAY

BUT OTHER ANGLIAN TIMETABLE ENHANCEMENTS ON HOLD 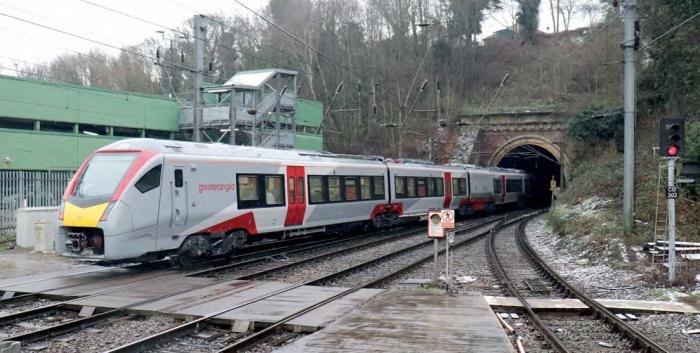 GREATER ANGLIA plans to introduce two services in each direction covering the journey between Norwich and London Liverpool Street in 90 minutes from the May timetable change. Current plans see one of the services in the shoulder peak and the other in the off-peak.

The services will also achieve a journey time of fewer than 60 minutes between London and Ipswich, and will operate on weekdays. If available, GA plans to roster the services for a pair of Stadler Class 755 four-car bi-modes, operating on electric power throughout. Stadler has already delivered four of the four-car units to the UK, with more due to follow between now and May, although none have yet been accepted by GA.

Should the Stadler units not be available, GA intends to roster a Class 90/Mk 3 set for the workings, with tests being carried out in late January and early February to ensure these can maintain such a schedule. Eventually Norwich to London services will predominantly be worked by Stadler-built Class 745 12-car EMUs. The first ‘745’, one of 10 built for Stansted Express services, was expected to arrive in the UK in mid-February, with 10 inter-city sets also on order.

GA Managing Director Jamie Burles told a Rail Conference for the East in Ipswich on 1 February that testing with the Stadler bi-modes was going ‘extraordinarily well’ compared to other new UK fleets.

The Norwich in 90 workings are likely to be the only significant enhancements to GA’s timetable in May, with further improvements due to be delivered in phases through to May 2021. In September a half-hourly service from Stratford to the new station at Meridian Water is due to use the new third track built as part of Network Rail’s Lee Valley Rail Programme (p23), with Meridian Water replacing Angel Road station, which is to close.

Mr Burles told the conference a significant timetable change is planned for May 2020. Improvements on course to be delivered in 2020 include the extension of Norwich to Cambridge services to Stansted Airport and direct services between Lowestoft and Liverpool Street.

Enhancements are contingent on the timing of delivery of GA’s new fleets; while the Stadler units are slightly behind schedule, the 111 Class 720 Bombardier Aventra EMUs are more significantly delayed as the manufacturer grapples with software issues relating to the sister Class 710 fleet for London Overground.

The timing of other improvements is less certain, with frequency enhancements on the Hertford East and Southend Victoria lines both on hold pending level crossing upgrade work. For similar reasons, the introduction of a third hourly service between London and Norwich as an extension of the service that currently terminates at Ipswich is in aspic for now. Timing for the doubling in frequency of the Ipswich to Peterborough service to hourly is also uncertain, with Mr Burles telling the conference work is ongoing with Network Rail around ‘the art of the possible without significant infrastructure interventions’ amid concerns around capacity for the service.

Meanwhile, GA is also reworking its depot and stabling arrangements following the cancellation of the plan to build a new depot at Brantham, near Manningtree. Crown Point depot is being expanded more significantly than was intended, with a £57 million investment underway and two full length stabling roads now in place. GA will also make use of the Wensum Curve and Victoria sidings for stabling. The shed at Ilford depot is being extended to accommodate the Aventra fleet, while a further wheel lathe is to be provided at a location yet to be confirmed by GA.