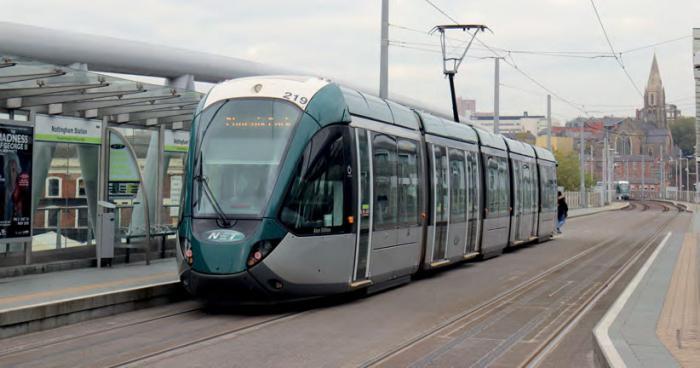 Nottingham Express Transit: tram at Nottingham station on 20 October 2018. In the background is a former Unitarian chapel that is now a Pitcher & Piano pub.
Philip Sherratt

A report to the Council’s Executive Board on 17 March sought approval to undertake the next stage of feasibility work for extensions from Nottingham station towards Gedling (initially to the Racecourse Park and Ride, 2.5-3.0km), from Toton Lane to the HS2 hub at Toton and thence to Long Eaton (1.5km), and from Clifton South to the Fairham Pastures development (1.8km). The capital cost of the three schemes together is estimated to be £275 million.

The council also plans to support neighbouring authority Broxtowe in its investigation of an extension from Phoenix Park to Kimberley and Langley Mill. Routes further west from the HS2 station to East Midlands Airport and Derby, which also feature in the HS2 Growth Strategy, and east towards Gamston, have been considered and are likely to be longer-term projects.

The next stage will be to develop an Outline Business Case, with this work expected to be completed and submitted to Government in autumn 2021. A Transport and Works Act Order application could then be made in summer 2023, with construction starting in 2025-26 and the extended network opening in 2028-29.