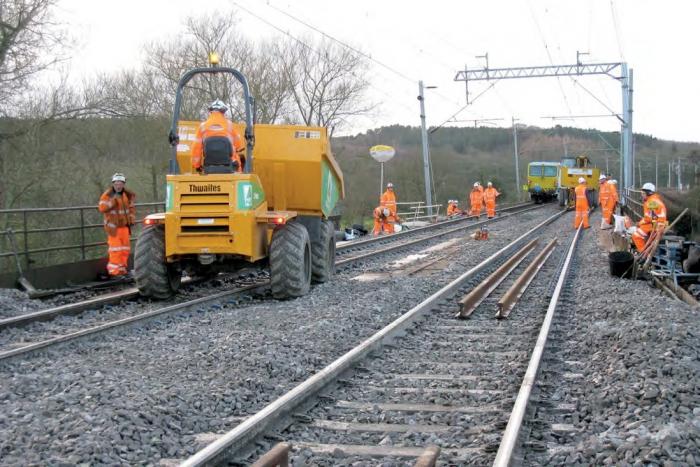 Renewing the railway: track replacement in progress on the Trent and Mersey Canal bridge near Stafford on 26 December 2017. Courtesy Network Rail

NETWORK RAIL’S strategic business plan (SBP) for Control Period 6 (2019-24) sets out ambitions to increase efficiency, drive down costs and focus chiefly on the operations, maintenance and renewals (OMR) of the network.

Published for consultation on 13 February, the plan proposes the £47.1 million allocated by Government for CP6 will include £18.5 billion spent on operations and maintenance, £18.5 billion on renewals and £10.1 billion on enhancements, chiefly those deferred from Control Period 5. Any further enhancements beyond this amount will require additional funding, whether from Government or other sources, although funding has been allocated for development of additional schemes.

The spending on OMR is proposed to be 25% higher than in CP5, with a gradual step-up planned over the first three years of the period to ensure the supply chain has the capacity to meet the increased demand. A particular focus in this area is on signalling, with NR saying it will need to renew 63% of its existing signalling assets within the next 15 years. If renewed on a like-for-like basis, NR predicts this will lead to the renewals spend increasing further through CP7 (2024-29) and CP8 (2029-34) but hopes to reduce this cost by adopting digital technology.

In terms of performance, the SBP sets out an aim to reduce delays by 15% in terms of Public Performance Measure (PPM), and to meet NR’s target there will need to be a 7% improvement by the end of the current Control Period next March. However, the ambition is for the industry to adopt ‘on time’ performance in CP6, measuring punctuality to within 59 seconds at all scheduled stops. While the number of service-affecting failures is lower than ever in NR’s history, the aim for CP6 is to reduce reactionary delays, and NR says it has tracked a plan indicating how different factors will affect this across the five-year period.

NR is looking to become more efficient and aims to achieve a 10% improvement in real terms efficiency during CP6, including saving £1.9 billion on renewals costs, a reduction of more than 11%. Under the company’s devolution strategy, each Route will be set different targets, with the aim of creating competition and harnessing innovation.

Following the consultation period, the Office of Rail and Road will give its ruling on the SBP in June in its Draft Determination, with Network Rail responding to this in August. The Final Determination is due for publication in October, followed by a consultation on NR’s draft CP6 plan in December. NR will decide in February next year whether to accept the Final Determination and will then formally publish its CP6 plan in March, ahead of the start of the regulatory period next April.