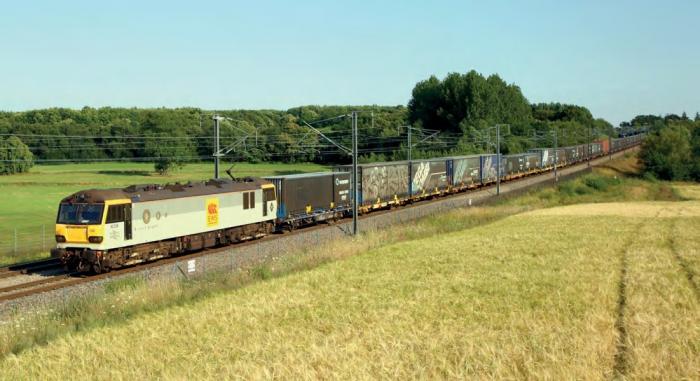 THE OFFICE of Rail and Road has ruled that HS1 Ltd should reduce its proposed charges to train operators over its next five-year Control Period, running from 2020 to 2025 (HS1 Control Periods differ from those of Network Rail; this is HS1’s CP3).

HS1’s base case proposal was for charges of £38.2 million per year, but the ORR has suggested cutting this to £26.1 million. HS1’s proposed amount was around twice that for CP2, which ORR says was driven by HS1 taking a different approach for risk and contingency and the inclusion of ‘delivery integrator’ costs.

HS1 had submitted the 5YAMS to ORR in May, with consultation on the draft determination to run until 11 November.

The infrastructure owner’s proposals were criticised by train operators, who would have been faced with substantial increases in access charges per train minute on the high-speed line compared to the current five-year period, with proposed rises of 43% for international passenger trains, 25% for domestic passenger and 74% for freight. Under ORR’s proposals, the rises will be reduced to 18% for international passenger, 17% for domestic passenger and 11% for freight.

ORR says it found deficiencies in elements of HS1’s plan, reconciliation of which would reduce the annual renewals annuity by £7.3 million.

It also disagreed with HS1’s proposal to class implementation of European Train Control System (ETCS) Level 3, planned for 2032, as a renewal rather than an upgrade, enabling a reduction of £2.9 million.

Further reductions were based on achievement of additional efficiencies compared to HS1’s proposals and its interest rate assumptions being too conservative, balanced by an increase to ensure adequate future funding of the escrow account, addressing underfunding in the first two Control Periods.

In its consultation ORR also invites views on the legality of levying direct costs on a per train minute basis rather than on a train kilometres basis, although the regulatory body says this would not affect the level of charges or how charges are apportioned to operators.

HS1 has until 30 November to make revisions to its proposed 5YAMS document, following which ORR will take into account consultation responses and the company’s revised proposals before publishing a final determination on 7 January 2020.

THE HIGH Court has ruled out an appeal related to the compulsory purchase of the Chart Leacon depot site near Ashford.

Ashford Borough Council defended the action brought by landowner Bellamile, which objects to Network Rail’s plan to bring part of the site back into use as a light maintenance depot. The council had approved a planning application from Network Rail on 31 July.

The site is to be repurposed as part of a plan to provide stabling for Thameslink trains operating the planned new services from Cambridge to Maidstone East.

Additional stabling is required in Kent for 6x8-car Class 700s, which would be stabled at Hitachi’s Ashford depot site, with Electrostars displaced from there berthed at Chart Leacon.

NR has been engaged in a battle with Bellamile over the plans, and has submitted a Transport and Works Act Order application seeking compulsory acquisition powers for the site. In the court hearing, Bellamile challenged the safeguarding of the site for railway uses for a period of up to two years, which commenced with the adoption of the Ashford Local Plan on 21 February 2019. The court rejected all Bellamile’s claims, as well as its request for an extension of time to correct its faulty procedure, and Bellamile was ordered to pay the council almost £34,000 in legal costs.

Bound for Birmingham: this shot at the CAF factory in Newport on 12 October 2019 shows pre-painted bodyshells from Spain waiting to go into the assembly hall. On the left is a Class 196 DMU for West Midlands Railway: CAF is building 26 units (12x2-car and 14x4-car) to replace Class 170s on WMR diesel lines. On the right is a Class 195 bodyshell for Northern. Stuart J. Hood

Saints on the South Western 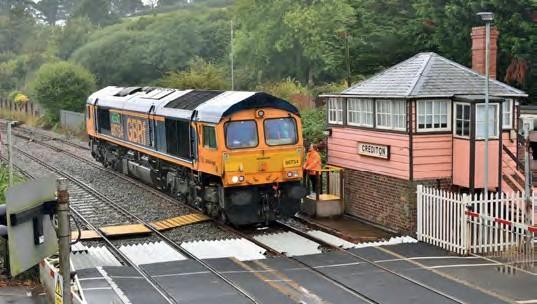 Unusual sight: this is GBRf Class 66 No 66754 Northampton Saints at Crediton, on the ‘Withered Arm’ route west of Exeter, with working 0Z67, the 14.05 Exeter St David’s to Exeter St David’s via Coleford driver route learning trip on 23 September 2019. The locomotive returned to Cardiff the following day. Tim Squires 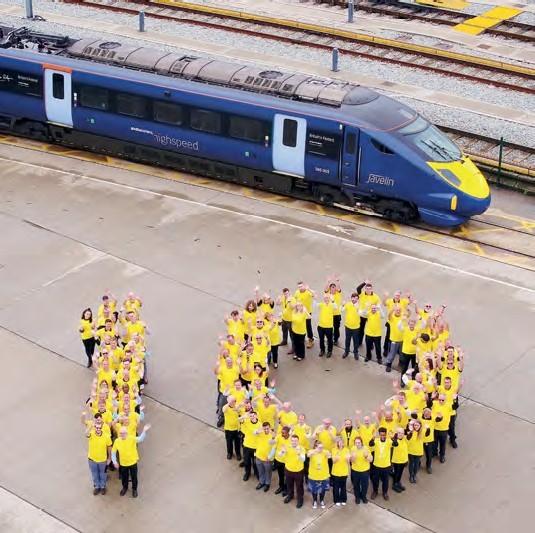 SOUTHEASTERN AND partners Hitachi Rail and HS1 have marked 10 years of the domestic high-speed service linking St Pancras with Kent.

The service launched with a special ‘preview’ trip on 29 June 2009, and over the past decade has carried more than 100 million passengers. An estimated £1 billion boost has been delivered to Kent’s visitor economy, and the service has supported around 72,000 jobs.

Hitachi supplied the 29-strong fleet of Class 395 ‘Javelin’ trains, which it maintains in Ashford. Operating at up to 140mph, the ‘395s’ are the UK’s fastest domestic train and have cut journey times dramatically between destinations in Kent and the capital.

HS1 is the infrastructure manager for the high-speed rail line, in partnership with Network Rail High Speed. The average delay per train for Southeastern’s Highspeed service is reported to be less than five seconds.