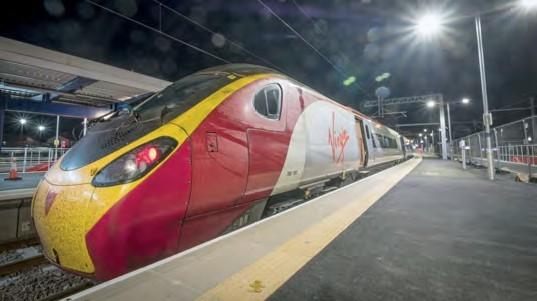 FOLLOWING THE successful energisation of the electrification between Preston and Blackpool North on 6 May and further testing of the route over the following week, Virgin Trains Pendolino No 390152 became the first of the class to traverse the route late on 14 May. The test run was a prelude to the introduction of an additional three return workings each weekday between London and Blackpool from 21 May.

Running as working 1Q01, the set departed Preston on time at 23.28, arriving at platform 4 at Blackpool North four minutes later than scheduled at 23.52.

It returned to Preston 10 minutes later than originally planned, at 00.15 on 15 May with the return journey (headcode 1Q02) also taking four minutes longer than the allocated 20 minutes.

A second return journey (Preston 01.02 – Blackpool North 01.27, returning at 01.46 and arriving at Preston at 02.11) followed, with Virgin reporting ‘all tests were successfully completed’.

These are in addition to the direct weekday return service that began in December 2014 – this leaves the resort at 05.30 and returns at 16.33 and will continue to be worked by a Class 221 Super Voyager.

The line to Blackpool North had reopened on 16 April, having been closed since November 2017 to allow Network Rail to carry out electrification work, although the Blackpool South line reopened earlier on 29 January. As well as electrification, NR rebuilt bridges and platforms, replaced track and installed new signals controlled from the Manchester Rail Operating Centre (ROC). Tony Miles