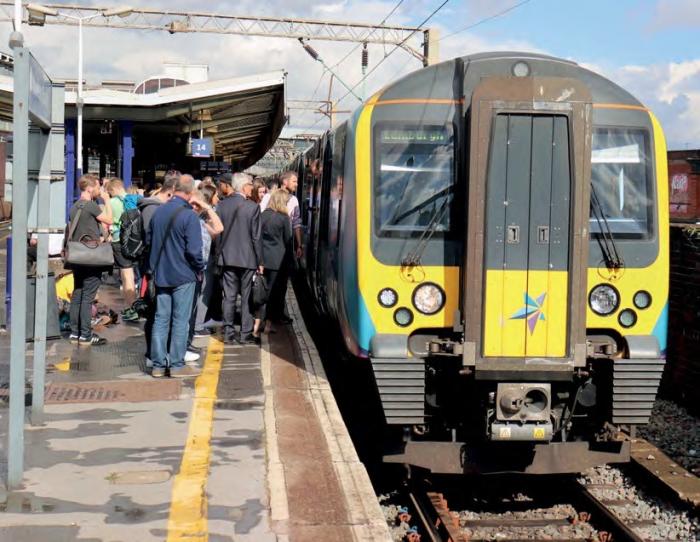 Platforms under pressure: TransPennine Express unit No 350401 calls at platform 14 at Manchester Piccadilly with the 16.10 Manchester Airport to Edinburgh service on 10 August 2018.
Philip Sherratt

NEW NR Chief Executive Andrew Haines says he has commissioned work to understand options for capacity through platforms 13 and 14 at Manchester Piccadilly.

It was originally envisaged to build an extra two tracks through the Piccadilly to Deansgate corridor to provide additional capacity alongside the now-completed Ordsall Chord. However, Transport Secretary Chris Grayling has mooted a Digital Railway solution here instead of building the extra tracks.

Speaking to the House of Commons Transport Committee, Mr Haines said ‘I’ve been quoted figures – there are very large sums of money involved when you talk about building additional platforms in Manchester. If we can deploy Traffic Management we might be better off replacing some of those fleets of trains with trains which have more doors.’

The Chief Executive said it was ‘way too soon for me to give a definitive view’, but that he agreed with Mr Grayling wanting to explore ways of delivering additional capacity without building extra platforms. He added that he had commissioned work to understand if 15 trains per hour could be delivered through platforms 13 and 14 without major infrastructure works.

Asked how he would target Digital Railway deployment more generally, Mr Haines suggested it should be concentrated in areas where large volumes of signalling equipment are coming up for renewal and where there are likely fleet replacements ahead, with the need for on-train fitment in mind. For CP6 he said this included the south end of the East Coast main line, the Trans-Pennine route and the Wessex Route into Waterloo. However, he said none of these areas had sufficiently well-developed proposals to enable funding to be ringfenced in the Control Period 6 business plan, but that using Early Contractor Involvement (as NR is doing on the East Coast – see page 19) could help establish the true cost of replacing conventional signalling, leading to the establishment of business cases.