THE COST of reopening the Portishead branch in Somerset, part of the first phase of the MetroWest improvements in the Bristol area, ‘is expected to be considerably more than the previous £58 million estimate’.

The news comes in a report to the West of England joint transport board meeting held in January. Network Rail is currently completing GRIP3 (option selection/design) works, which have identified that ‘the extent of engineering works to reopen the Portishead line has increased significantly’. The final design and capital cost estimate are due to be presented to the JTB in March, and the report says that discussions are underway with Network Rail and the Department for Transport surrounding identification of additional funding.

The work required to reopen the line and provide for a half-hourly passenger service includes 9km of works to the Portbury freight line, which is still in place, including raising the linespeed from 30mph to 50mph to maintain capacity for freight trains as well as passenger. This is said to be ‘one of a number of factors identified’ which mean that ‘considerably more extensive works are needed’. A further 5km of railway works will be required to the disused line on to Portishead, along with major highway works at Ashton Gate. The design for the scheme includes works to multiple structures, including four tunnels, three viaducts, 12 underbridges, 14 overbridges and 3km of retaining walls. 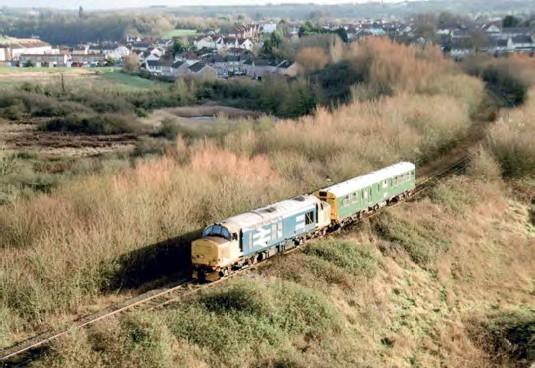 Inspection visit: on 13 January 2017 DRS’s No 37402 worked inspection saloon No 975025 over many of the lines proposed for MetroWest operation. The ensemble is seen here by the Portbury dock stop board; the solum to Portishead, which has recently been cleared of vegetation, is just out of view to the top right of the picture. Richard Giles

The Phase 1 element of MetroWest also includes provision of a half-hourly service on the Severn Beach line and to intermediate stations between Bristol and Bath. The aim is to begin construction work in 2018/19, with Phase 1 opening in late 2019 or the first half of 2020. The report to the JTB suggests that, based on the original budget, there exists a £0.5 million funding shortfall for Phase 1; the majority of the finance for the scheme comes from the local growth fund.

Phase 2 proposes an hourly service on a reopened Henbury line with stations at Henbury and North Filton and along the Filton Bank, as well as a half-hourly service on the Yate to Bristol line, with opportunities to extend this to Gloucester being explored. The aim is that this will open in May 2021, with a current scheme cost of £43.1 million, which is fully funded.