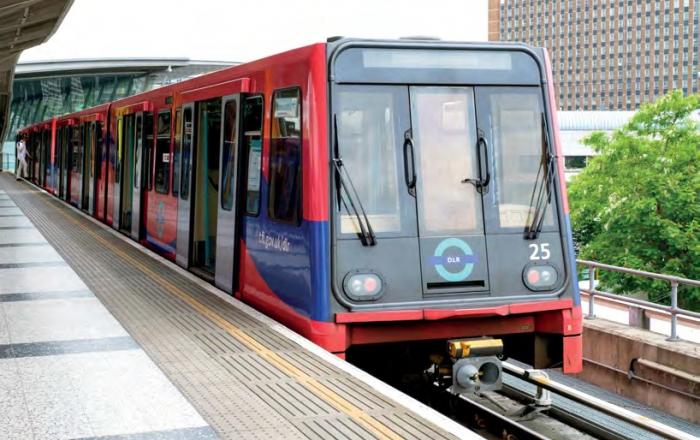 Set for replacement: DLR B90 stock light rail vehicle No 25 waits to depart from Stratford with a service to Canary Wharf on 23 May 2017.
Russell Wykes

TRANSPORT FOR London has published an Official Journal of the European Union (OJEU) notice seeking expressions of interest from manufacturers to build a new fleet of trains for the Docklands Light Railway.

TfL is seeking to order 43 87-metre-long trains, 33 of which will replace the 70 B90/92 trains currently in use, which are the oldest on the DLR. The remaining 10 would support capacity increases in the Royal Docks area. DLR services presently operate with two or three trains coupled together, but the new fleet will be fixed formation units with walk-through carriages equivalent to the length of three current trains.

The aim is to issue an invitation to tender for the new fleet later this year, with contract award planned for summer 2018. The fleet would be introduced between June 2022 and June 2024, with options for further vehicles to be added.

On-board facilities planned include real-time information screens, air conditioning and mobile device charging points. TfL is also seeking improved reliability, and is aiming for a mean distance of 50,000km between service-affecting failures. The depot at Beckton is to be expanded to accommodate the new fleet.

Procurement is planned through a manufacture and supply agreement, with the DLR franchisee responsible for maintenance and a separate fleet support agreement seeing the manufacturer offer technical support and supply spares. The trains will be financed by a lease, whereby each train would be paid for by the lessor and purchased by TfL at a later date, when it can make funds available.