Spanking new sidings: No 66623 heads aggregates hoppers from Tunstead at the new facility on 29 April 2019, the day of the official opening. Rob France

The £14 million project in the Hogshaw area has seen a disused council waste facility converted by contractor Buckingham Group into 430 metres of sidings, allowing DB Cargo and Freightliner to lengthen their trains from 18 to 26 wagons. The sidings were opened by High Peak MP Ruth George on 29 April 2019.

The scheme is part of Network Rail’s Peak Forest to London Freight Programme, which aims to increase freight capacity between terminals in the Peak Forest and Hope Valley areas and the capital by using longer trains. Part of this would involve lengthening freight trains serving the Peak District quarries at Dowlow and Hindlow.

THE POLITICS OF DECARBONISATION

In the April 2019 issue (p22), Roger Ford gave a comprehensive run down of the issues facing rail freight if it is to decarbonise. His analysis concluded that none of the nascent technologies under development for the passenger sector are likely to have the necessary power output for hauling freight any time soon, even with the scale of research and development likely in the coming decades.

This analysis resonates with that of the Decarbonisation Taskforce, on which rail freight is represented, and other bodies who have studied the question. All have concluded that hydrogen and battery is unlikely to provide the necessary tractive force, and even if it could, the space necessary to hold the fuel tank or battery packs would significantly reduce the payload and make freight services commercially unattractive. Yet there can be no escaping the need to look for a way forward, because the politics of decarbonisation are unescapable. When he was rail minister, Jo Johnson famously set an objective to remove all diesel-only trains by 2040, and subsequent policy statements have gone further. Recently the National Infrastructure Commission concluded that HGVs can decarbonise fully by 2050 (a claim disputed by some in the road sector), and that rail could also do so but only with support from Government. The Committee for Climate Change was slightly less bullish, noting that there might be some residual carbon from rail freight by 2050, but still recommending urgent action to reduce carbon emissions from surface transport.

To further compound the question, air remains high up the political agenda and diesel users are under the spotlight. Although current measures such as the Mayor of London’s ultra-low emission zone are focused on road freight, many RFG members are finding that air quality is a significant factor in planning applications with local government. Measures to improve air quality have some alignment with decarbonisation but in some cases contradict, with certain technology to reduce air emissions actually increasing fuel use.

Today rail freight still significantly outperforms road freight on both measures. Using rail remains, and will remain for many decades yet, the right way to reduce carbon and air quality emissions from surface transport. (Rail freight also, of course, plays a significant role in decongesting the road network, a benefit that will remain even if HGVs can turn to alternative fuels.) However, the politics mean that there is no room for complacency. So, what can be done to address this dilemma? Firstly, research. Through RSSB there is already a body of work underway, to look at short- and longer-term traction options for freight. This includes the potential to modify the current fleet, where that might be cost-effective, and also to bottom out the potential for using alternative fuels in combination if not isolation. A definitive statement of the possible, and the impossible, will be essential to frame the future debate and to establish confidence. Secondly, electrification.

Unpopular as it may be in some parts of Government, decarbonising the railway will require a renewed programme of electrification (both for freight and where diesel bi-modes need ultimately to be replaced). The Railway Industry Association’s recent electrification cost challenge report (p20, last month) is an excellent start on unlocking a future programme, and we need to work jointly to make the case for key projects that will benefit freight. Network Rail will also need to ensure that the power supply for the railways is sufficient, particularly with increasing demands on the National Grid from electric cars and road vehicles. 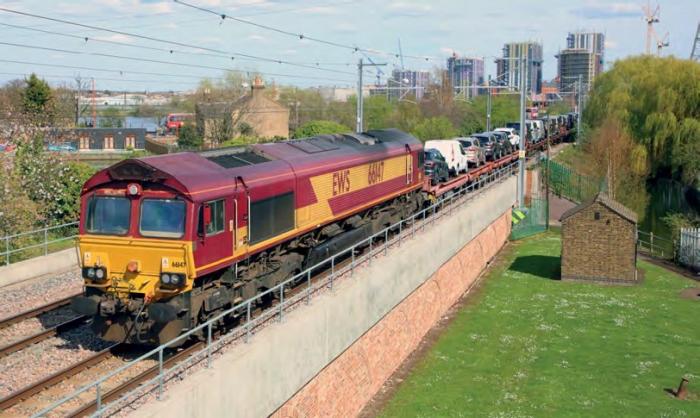 A step backwards: as fresh emphasis is put on decarbonisation of rail freight, one service that runs under the wires has recently switched from electric to diesel haulage. The 6X77 Dagenham to Mossend cartic working moved to Class 90 electric traction when the Gospel Oak to Barking wiring was completed, but now it has switched back again. On 5 April 2019, diesel No 66147 is seen on the train at Walthamstow Wetlands. Jamie Squibbs

Finally, promotion of smaller measures which can reduce, if not eliminate, carbon and air quality emissions. A significant proportion of the Class 66 fleet is now fitted with auto start-stop equipment, and we need a campaign to increase its use, particularly on the network and in possessions. Measures such as Traffic Management and Driver Advisory Systems have a role to play in reducing fuel use, as would more streamlining of freight paths on the network. Many ports and terminals are looking at how best to demonstrate their role in managing air quality; including rail freight in that story would help to show a joined-up approach.

There is no doubt that this agenda is difficult for the railways, and freight in particular, but despite the obvious challenges there are many things that can be done to move towards decarbonisation, retaining rail freight’s position as the environmentally-friendly mode for surface transport.

THE NATIONAL Infrastructure Commission has called for both road and rail freight to decarbonise by 2050 and says in the case of rail Government action is key to achieving this.

In its report ‘Better delivery: the challenge for freight’, the commission assesses decarbonisation options for both the road and rail sectors.

It says unless action is taken, emissions from road and rail freight could make up around 20% of the UK’s allowed emissions in 2050. A common decarbonisation target is called for covering both road and rail, with the NIC suggesting no part of the freight system should be indirectly subsidised by being allowed to emit carbon when other parts are decarbonising.

For rail freight, the Commission says Government should undertake detailed cross-modal analysis of decarbonisation options using a corridor-based approach. It calls for the publication by the end of 2021 of a full strategy for rail freight to reach zero emissions by 2050, specifying the investment and/or subsidies it will provide to achieve this, in good time for the start of Control Period 7 (2024-29).

Discussing decarbonisation options, electrification is noted as a proven technology but is described as ‘expensive and disruptive during construction’. The Commission suggests a proposal to electrify 515km of track could allow nearly two-thirds of existing services to be electrically-hauled but states this could cost between £2 and £4 million per single track kilometre based on data from previous projects. However, it notes this could still turn out to be cheaper and quicker than other methods of decarbonisation.

New facility: L&S Aggregates has established a stone terminal at the site of the former Bevois Park yard, south of St Denys station. The terminal, which is receiving limestone from Merehead and Whatley for local construction projects, shares the two sidings originally established to supply aggregates to the adjacent Tarmac ready mixed concrete depot on the same site. Here DBC’s No 66187 runs forward into the yard head shunt on 30 April 2019 in order to split the loaded wagons for unloading in the sidings behind. Steve Stubbs