THE RAIL freight industry is doing all it can to ensure the continuation of supply of goods during the coronavirus crisis, according to the Rail Freight Group.

As restrictions began to be imposed, RFG issued a statement on 19 March setting out its key priorities for the sector. This included calling for rail freight staff to be classed as key workers, for rail network operations to be prioritised for movement of key freight trains and for support to private sector businesses to keep trains running and increase volumes where required.

RFG also called for temporary changes to the Mode Shift Revenue Support scheme to ensure viability of services, particularly where these are not fully loaded, and for suspension of track access charges to enable freight operators to quickly respond to customer priorities and support critical services. It suggested planned infrastructure work should continue where possible, as it supports the construction logistics sector. 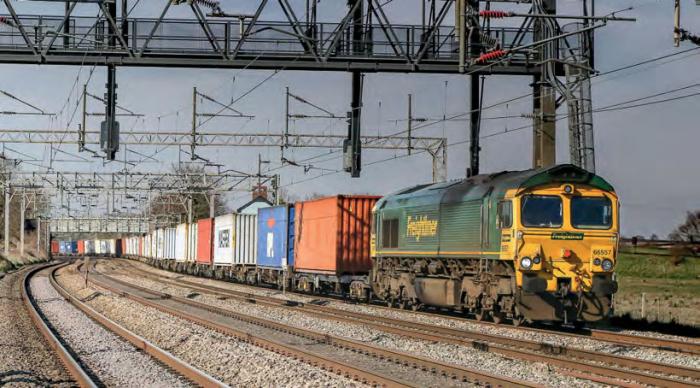 Key freight flow: the reverse curves of the West Coast main line near Dordon are evident as Freightliner Class 66 No 66557 heads south with a Trafford Park to Felixstowe working on 23 March 2020.
Graham Nuttall

Network Rail said 188,000 tonnes of critical supplies were being moved every day within its North West and Central Region by rail, much of it along the West Coast main line. Freight companies have looked at how to reconfigure trains by adding more containers to meet demand. As well as Anglo-Scottish intermodal flows carrying consumer goods from the terminal at Daventry, other key flows included biomass trains from Liverpool docks to Drax power station, petroleum from Scotland to Dalston in Cumbria and from Humberside to Kingsbury oil terminal in the West Midlands. Royal Mail trains continued to take parcels and post between Wembley and Shieldmuir, Glasgow.

On 27 March, Network Rail’s Wales and Western Region highlighted that in just one week it had supported the movement of more than 370,000 tonnes of freight across its area. This included movements of food and medicine, of tinplate from Llanelli to create food cans and of petroleum products from south Wales, as well as removal of household waste from major cities including London. NR said the amount of food being moved on the railway within the region had increased by 20%.

Within Network Rail’s Southern Region the company said 381 freight trains ran in the last full week of March carrying over 260,000 tonnes of vital supplies, with key freight routes prioritised including Southampton to Reading and Lewisham to Clapham Junction, which links to the West London line.

For Anglia Network Rail reported there were up to 72 trains in and out of Felixstowe and up to 20 to and from London Gateway each week, carrying up to half a million tonnes of products, as well as movements of silica sand from Middleton Towers quarry near Kings Lynn and gas condensate from North Walsham to Harwich. Arriving in the region was a daily Tesco train from Daventry to Barking and Purfleet.

Within Yorkshire over 400,000 tonnes of freight was being transported per week, including around 100,000 tonnes of key supplies as well as fuel, materials, and finished product for the steel industry, most of which was being moved to Scunthorpe. Other flows included letters and parcels along the East Coast main line, movements of sand, gravel and stone and waste transporting trains. 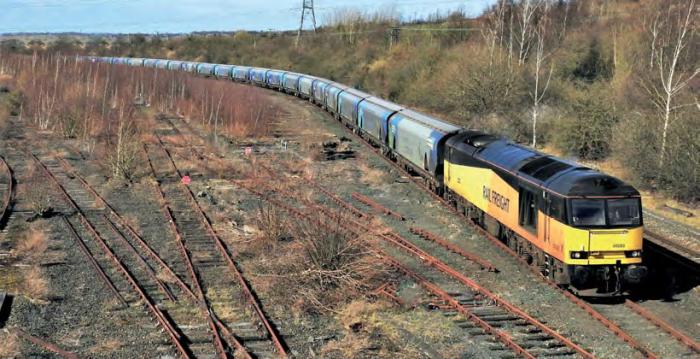 Keeping the lights on: since closure in 2012 most of the tracks and sidings at Healey Mills marshalling yard have remained in situ and trees are now maturing through the once busy tracks. Passing the scene on 12 March 2020 was train 6E09, the 08.10 Tuebrook on Merseyside to Drax power station loaded biomass bogie wagons. The motive power was former Colas and now GB Railfreight Class 60 No 60085, which presently retains its Colas livery.
John Vaughan

In a statement on 25 March, GB Railfreight Managing Director John Smith said: ‘Our services are playing a vital role in ensuring the continuation of supplies. We are running services from ports such as London Gateway, Southampton, Felixstowe and Teesport to distribution centres across the country. These flows are ensuring that warehouses remain stocked, and supermarkets and other essential retailers remain supplied.

‘GB Railfreight’s services are also ensuring that the UK can keep the lights on. We are delivering vital supplies of biomass which are transported across the country by rail to Drax power station in Yorkshire, which supplies 6% of the UK’s electricity needs.’

Freightliner owner Genesee and Wyoming highlighted the flexibility and resilience of its operations and the presence of business continuity procedures to cover a variety of situations, as well as action to prevent the spread of infection across its workforce and supply chain.

Direct Rail Services said it was continuing to run its services and had well-rehearsed emergency business continuity plans to ensure its sites and facilities could operate safely and securely.