ROYAL ASSENT FOR HS2 PHASE ONE

THE HYBRID bill for Phase One of HS2 between London and Birmingham has gained royal assent, meaning construction of the line can begin in the spring.

The bill has been subject to over three years of Parliamentary scrutiny. The first phase is due to open in 2026, and is planned to be followed by Phase 2a onwards to Crewe in 2027 and Phase 2b to Manchester and Leeds in 2033.

Classic compatible trains will also operate away from the captive network, meaning high-speed services will begin operating to destinations such as Manchester, Glasgow, Liverpool, Preston and Wigan from the outset.

The bill was backed by a majority of 399 to 42 in the House of Commons and by 386 to 26 in the House of Lords. The Government says HS2 will create around 25,000 jobs during construction as well as 2,000 apprenticeships and will support growth in the wider economy, worth an additional 100,000 jobs.

The Government is launching schemes totalling £70 million for communities along the route between Birmingham and London.

These comprise the community and environment fund and business and local economy fund (together worth £40 million), which will support communities and local economics affected by HS2, with a further £30 million road safety fund going towards local schemes in areas not currently accustomed to construction traffic.

Operation of Phase One services on HS2 will initially be the responsibility of the winner of the West Coast Partnership franchise competition, due to be announced in November 2018. The successful bidder will help to design the pattern of HS2 services and will have a major role in the interior design of the trains. Government has also begun procurement of a fleet of up to 60 classic compatible trains for HS2, with a contract expected to be awarded in 2019.

Three enabling works contracts, valued at a combined total of £900 million, were let in November 2016. The main construction works have been divided into seven packages valued at up to £1.5 billion each and are planned to be let as a two-part design and build contract. Nine consortia have been shortlisted to bid for up to four packages of work each but can be awarded a maximum of two.

With the bill now having received royal assent, we will be following progress with HS2 in a new monthly column by Pete Brunskill. Turn to page 76 of this issue for the first instalment of this new feature. 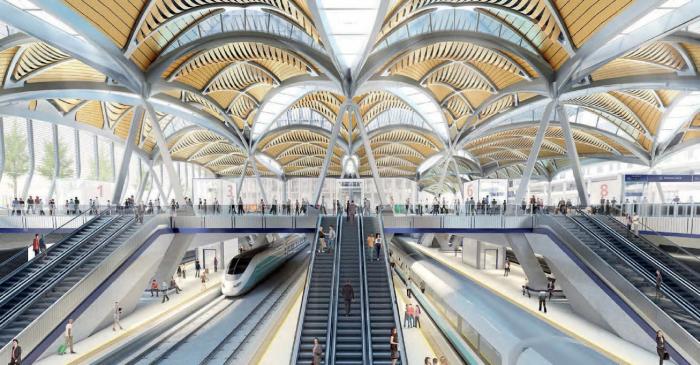 London terminus: artist’s impression of the HS2 station at Euston.