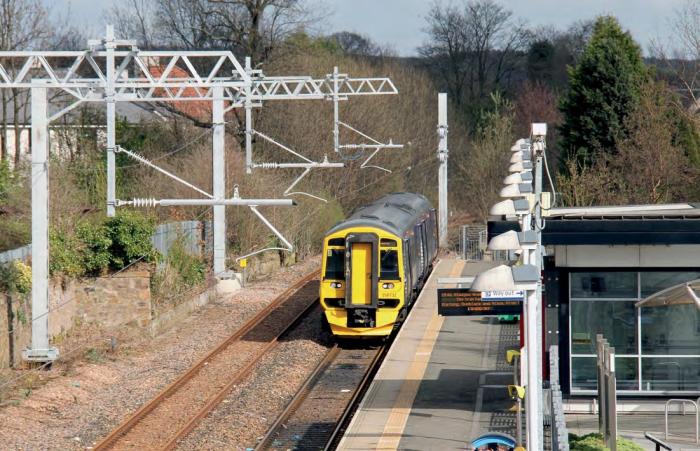 Alloa progress: a four-week blockade in late March / early April saw masts and wires installed on the branch. The Stirling to Alloa line reopened to traffic on 16 April when No 158732 was photographed waiting to depart as the 15.41 to Glasgow Queen Street.
Ian Lothian

THE SCOTRAIL Alliance has published a performance improvement plan. The move follows an independent review by former TransPennine Express Managing Director Nick Donovan, who has made 20 recommendations, all of which have been accepted by the alliance. Mr Donovan will continue to work with the alliance, a joint venture between operator ScotRail and Network Rail, to support the delivery of the plan.

The recommendations cover a range of topics, including both infrastructure and fleet reliability. The former includes elimination of infrastructure failures occurring soon after work completion and improving the determination of root cause for infrastructure component failures, as well as work to agree preparedness for the autumn season. Fleet-related recommendations include reviews of depot production management arrangements and improved fleet maintenance planning processes.

Other recommendations cover operational aspects, including the building of a network-wide performance model with both unit diagrams and crew diagram dependencies. Mr Donovan calls for urgent measures to ensure confidence in right time departures from Whifflet and Milngavie stations, for a review of the relationship between the delivery plan and recovery plan for Glasgow Electric services and for reinstatement of diversionary route knowledge for Yoker drivers on both the main line and Bellshill routes to Motherwell. The suspension of skip stopping unless used as a last resort and put in place before a service departs its origin is also recommended; ScotRail has been the subject of particular criticism from passengers concerning this practice.