ENGINEERS HAVE begun detailed studies along the route between Teignmouth and Dawlish in Devon, with a view to safeguarding its future.

Since 2014, when the railway line between Exeter and Newton Abbot was closed for eight weeks owing to severe weather, Network Rail has been putting together plans to safeguard the railway to the South West for the long term.

In 2016 Network Rail completed the Exeter to Newton Abbot geo-environment resilience study which identified that, unless a series of short-, medium- and long-term measures are put in place, extreme weather and coastal erosion are likely to mean the events that closed the line in 2014 will occur more frequently. The report identified three priority areas that require improved resilience to enable the railway to be maintained in the face of extreme weather:

◘ the railway between Parsons Tunnel and Teignmouth, where there was a landslip on the cliffs in 2014;

◘ the sea wall which collapsed at Dawlish in 2014;

◘ the cliffs between Kennaway and Parsons Tunnels.

Network Rail is now beginning the next phase of work with a detailed geological and marine study to help the company understand what is happening to the cliffs and coastline.

This will enable it to consider what measures could be put in place in these areas to maintain the railway.

During 2018 and early 2019 NR will be putting together outline options for discussion with the local community, council and Department for Transport before any decisions are taken by government. 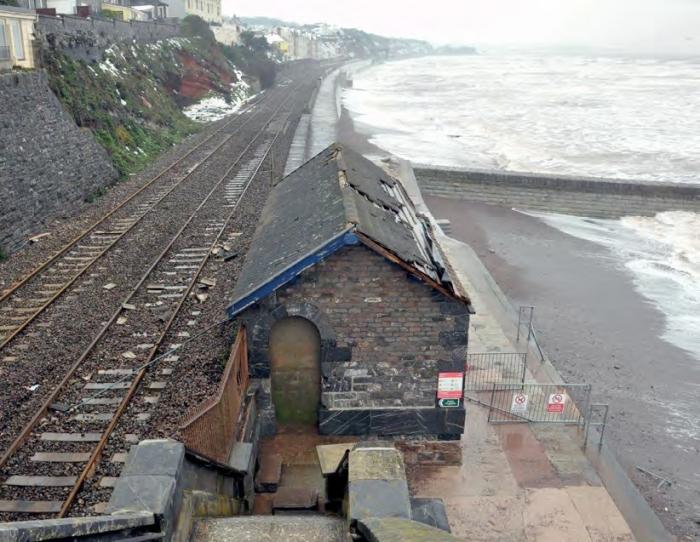 When Storm Emma met the Beast from the East: the roof of the former Lifeboat House between the railway and the sea at Dawlish became damaged and the slates and roof supports were blown onto the track on the night of 1-2 March 2018, when the line between Teignmouth and Dawlish Warren was pounded by a rough tide aided by a strong east wind. David Hunt