SEE HOW THEY RUN 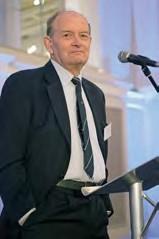 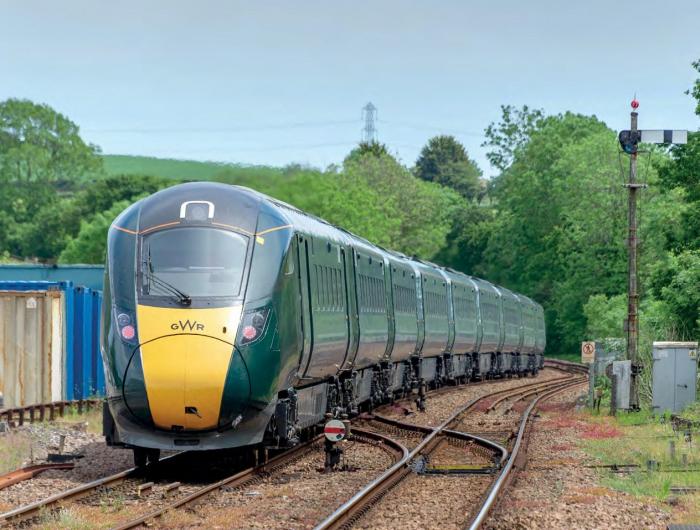 Long train running: IET No 802102 heads away from Liskeard with a Penzance to Paddington service on 1 June 2019. Fraser Pithie

This month’s table sees the return of the Great Western Hitachi fleet, now at full strength with 93 units delivered.

Some sets continue to be released for service restricted to diesel-only operation; the main reason for this seems to be pantograph inspection issues. However, as with most of the new fleets this month, reliability continues to improve. At the top of the table, Wimbledon depot is maintaining its traditional dominance in EMU reliability. But in second place the ScotRail Hitachi Class 385s are pulling away from the GTR Siemens Desiro City Class 700 fleet. After a brief appearance, the Great Northern Class 717s have stopped reporting.

While I hope readers find this monthly review useful, I also try to add value by turning the data into information. This month I have calculated the average mileage run by a unit in a year (Table 8).

Obviously this depends on the type of service. So the inner-suburban SWR Class 707s and Crossrail 345s are similar. Reflecting the Class 385 and Class 700 outer-suburban running, the mileages are higher but equally close.

In Period 1 (April), the GWR 800 Series fleets were still sharing duties with IC125, so too much attention should not be paid to these mileage figures. Maximum utilisation will be achieved when the ‘electric’ timetable is introduced in December. For reference, in 2016-17, the sets in the GWR IC125 fleet were averaging 208,000 miles per year.

Having analysed the new fleets, I thought it might be instructive to see what the current inter-city fleets are achieving. The results in Table 9 gave new meaning to the oft-used phrase ‘sweating the assets’.

I had expected the Virgin West Coast Pendolino fleet to top the table, but it’s hats off to serial Golden Spanner winner Craigentinny depot and its IC125 fleet with an annual mileage per unit that sent me back to the source data to double-check my sums. Second place goes to the IC225 fleet, already being withdrawn, also over the 300,000-mile mark.

Why are the Class 390s a close third? The obvious explanation is that the East Coast main line offers longer stretches of high-speed running with fewer stations. The IC125s have even longer runs into Scotland.

With the GWR IC125s being withdrawn after 43 years in frontline service, looking up these details reminded me of InterCity Director John Prideaux’s reply when I asked him why there were no celebrations of the 10th anniversary of IC125 services. ‘We don’t want people to realise it’s an old train.’ To add further historical perspective, Table 9 includes the best performance achieved by the IC125s’ predecessors, the Class 55 Deltics. This was during the 12 weeks of the summer timetable in 1963, when utilisation was maximised.

Of course, for serious diesel loco utilisation, there was the English Electric prototype DP2.

With the aim of giving it a good work out, the loco was transferred to Finsbury Park to cover while the Deltics were being taken out of service for steam heating boiler modification, also in 1963. 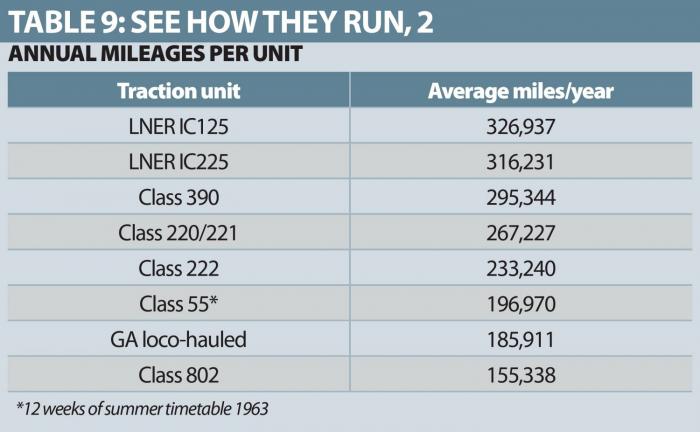