NETWORK RAIL has begun work on electrifying the Shotts line, meaning all four routes between Edinburgh and Glasgow will be electrically operated (the routes via Carstairs and Bathgate are already wired, while introduction of EMUs on the route via Falkirk is imminent).

On the Shotts line there are currently no wires between Holytown in North Lanarkshire and Midcalder Junction in West Lothian, where the West Coast main line route from Carstairs is met.

Constructed by the Caledonian Railway and opened in 1869, the route from Cleland to Midcalder closed a gap in that company’s network. The new CR line tapped mineral fields around Shotts and other locations where coal, ironstone and oil shale provided freight traffic. A network of mineral and branch lines developed on this high and windswept terrain – it had snow fences around Fauldhouse.

The line runs through towns within commuting distance of Glasgow and Edinburgh, such as West Calder, which are served at present by Abellio ScotRail Class 156 or 158 DMUs. The station at Livingston South, serving a ‘new town’ of the 1960s, is to be rebuilt.

BAM Nuttall has been responsible for structures, raising or replacing overbridges and parapets at 17 locations and increasing parapet height at 10 other bridges. This work also includes new footbridges at stations and platform extensions to accommodate the new Hitachi-built Class 385 trains. There have been lengthy road closures and diversions. Carillion has the contract for the overhead line installations, so far totalling 1,458 piled foundations preparatory to supporting 1,265 masts. Completion is scheduled for 2019 at a cost of £49 million. Ann Glen 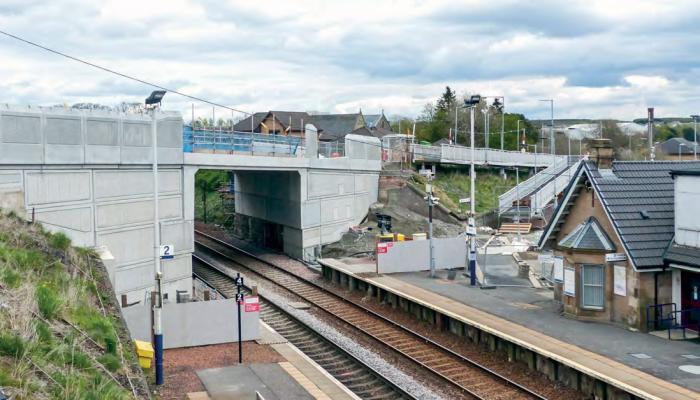