On 11 May Siemens announced plans to cut 1,700 jobs in Germany over the coming years, including an immediate move affecting 300 jobs at its Krefeld plant. The changes are part of what Siemens describes as ‘targeted efficiency improvements’ in a transformation to a ‘modern, digital enterprise’. In addition, around 1,000 more jobs will be transferred to external service providers within Germany or to other units within the company, although Siemens says around 9,000 new employees will be hired in Germany alone within the same period.

While Siemens’ mobility division reported a health gross profit of €678 million in 2016 on a turnover of €7.83 billion, the company says business units such as mainline transport and urban transport are struggling with increasing competition and rising cost pressures. In particular, Siemens highlights the ‘aggressive globalisation strategy being pursued by the largest Chinese competitor’ and that overcapacities on the market have resulted in ‘substantial price declines’. In the wider Siemens context, mobility is one of the company’s least profitable divisions and one of only two with margins in single figures (the other being wind and renewable energy).

The move follows news of a potential merger between the rail engineering businesses of Bombardier and Siemens which broke in mid-April, initially reported by business news company Bloomberg. Both companies told Modern Railways they do not comment on speculation, but neither denied the possibility of such talks.

As we have reported previously, Bombardier has faced significant financial challenges as the wider group’s aerospace activities (principally developing and building new mid-sized airliners to compete with the B737/A319 series offered by Boeing/ Airbus) have made slow progress, with consequent cost and revenue effects. As a result, Bombardier Transportation, which unlike its Canadian parent is based in Berlin, was placed in a separate holding company in November 2015 (Bombardier Transportation (Investment) UK Ltd, based in London rather than Berlin!). Quebec government owned pension fund manager Caisse de depot et placement du Quebec (CPDQ) bought a 30% stake in the new holding company for $1.1 billion in February 2016. CPDQ has certain rights under this agreement, which it could use to assist or potentially try to frustrate a merger or takeover, although its statutory role is to maximise returns to fund future pensions, so a strictly financial assessment of any proposals is likely. Bombardier Transportation had a turnover of $7.58 billion in 2016, achieving an EBIT (earnings before interest and taxation) profit of $396 million. Bombardier Group’s total turnover was $16.4 billion, so Transportation represented 46.2%.

Unlike Bombardier, which is a purely transport-focused company (albeit mainly on rail and aerospace markets), Siemens is a major international electrical engineering group. Its published strategy is focused on ‘electrification, automation and digitalisation’, specifically power generation, power transmission, energy application and imaging/diagnostics. The ‘mobility’ business area is seen as an ‘energy application’, and includes not only rail-based transport but electrically-powered road transport and traffic control systems across transport modes. Under Siemens’ overarching strategy, the rail engineering business could be seen as part of the core business (as now), because it consumes design capability and thousands of electrical components from Siemens’ other factories. Alternatively, in the right context it could probably be viewed as non-core and potentially spun-off to a new owner or jointly-owned structure.

Following the reports of the possible merger, shares in Bombardier rose by 7% on the Toronto stock exchange on the expectation that the German group would seek to acquire Bombardier Transportation. Siemens’ share price barely moved, and slightly declined over the following few days. Bombardier has been the subject of merger or takeover speculation in the past, with Chinese group CRRC reportedly interested in acquiring the business prior to the 2015 CPDQ investment. 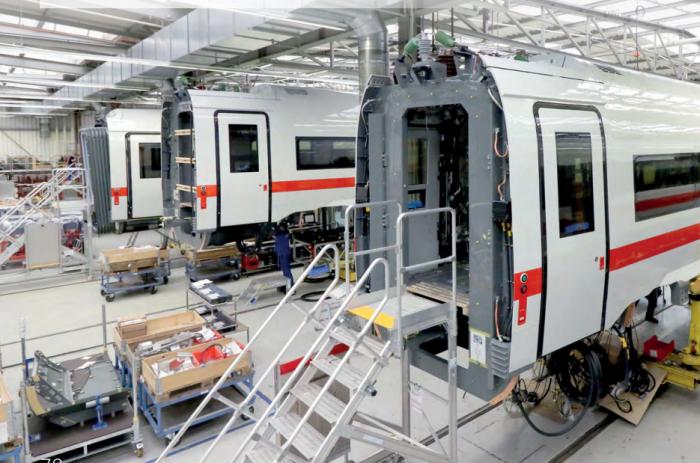 Jointly manufactured: all the coach bodies for DB’s new ICE4 trains are made by Bombardier, mainly in Poland, with all the powered vehicles then delivered to Siemens at Krefeld for final assembly. Vehicles for DB ICE4 Class 412 trains Nos 9008 and 9009 being completed at Siemens, Krefeld on 29 March 2017. Keith Fender8

Whether a merged Siemens and Bombardier rail business will be welcomed by politicians, unions, customers and regulators remains to be seen. On one level, such a company would be a sufficiently large competitor to Chinese rail engineering group CRRC, which is gradually increasing its global presence. Building on the acquisition of Czech rail manufacturer Škoda Transportation, it plans to establish a significant EU presence and is opening new assembly plants in the USA, where the company has had recent success with several metro train contracts.

Bombardier has in recent months discussed job reductions and workload reassignments with its works councils at several German plants; there is clearly more capacity in its German network of assembly factories than is required by present order levels. Perhaps because there is a general election in Germany in September, no plant closures have been announced, although several have been mooted as possible by trade unions. Bombardier has already moved much of its lower added-value production to lower cost countries; body panels for Talent 3 EMUs and those trains assembled in France for SNCF mostly come from Bombardier factories in the Czech Republic; Traxx locomotives are assembled at the old Henschel plant in Kassel but the bodyshells come from Wroclaw in Poland; the new DB ICE4 car bodies, all of which Bombardier is building as sub-contractor to Siemens, are being made at a newly-equipped part of the Wroclaw site. Like Siemens, Bombardier has factories that specialise in certain components and supply the entire group’s factories – Bombardier bogies are made in Siegen, Germany and Siemens ones in Graz, Austria.

Politicians and regulators seeking to support such a merger can point to little overlap in production facilities – outside of Germany and Austria! Bombardier has significant plants in the UK, France, Sweden, Belgium, Poland and the Czech Republic, whereas Siemens is much more focused on its assembly plants in Krefeld, Germany and Vienna. Outside Europe, Siemens has a major factory in California and both companies have joint venture arrangements with different partners in China and Russia.

Many of the products both companies sell, from high-speed to light rail, are replicated by other major players such as Alstom, Stadler, Hitachi, Skoda, Newag or Pesa. The only big exception is main line electric locomotives, where Siemens’ Vectron and Bombardier’s Traxx series between them account for almost the entire EU market.

In recent years Siemens has developed joint manufacturing approaches to several major contracts in Germany and Eastern Europe, effectively outsourcing some of the lower value and lower margin metalworking activities. This includes sharing manufacturing for the DB ICE4 contract with Bombardier, delivery of the new Berlin S-Bahn EMU fleet with Stadler Pankow and in Poland metro EMU construction with Polish firm Newag.

Cross-border regional services connecting Arnhem in the Netherlands and Dusseldorf in Germany via Wesel and Oberhausen began on 6 April. They are operated by Abellio on behalf of regional governments in both countries, who are funding the service. The services are using brand new Flirt 3 EMUs built by Stadler in Poland.

The relatively short route has three traction voltages (1.5kV DC on the Arnhem to Zevenaar section, 25kV AC from Zevenaar to the German border and 15kV AC in Germany). The short section of 25kV AC was created to enable freights switching to or from the Betuweroute freight line to Rotterdam to avoid a voltage change; as a result, any train using the classic route from Arnhem to Emmerich now has an extra one! The traction changeovers and also the use of three signalling systems on the route meant the first few days of service were marred by operating problems. The new regional service is intended to supplement the existing Frankfurt to Amsterdam ICE service, which serves Arnhem and key cities in the Ruhr conurbation.