NETWORK RAIL has confirmed that Siemens Mobility has been chosen as the Train Control Partner (TCP) under the East Coast Digital Programme (ECDP). The contract takes the form of a framework agreement, under which contracts will be called off for specific schemes replacing existing signalling with the European Train Control System (ETCS). Contracts will include detailed design, supply, installation, integration with associated systems and commissioning plus maintenance support for the estimated 30-year service life. 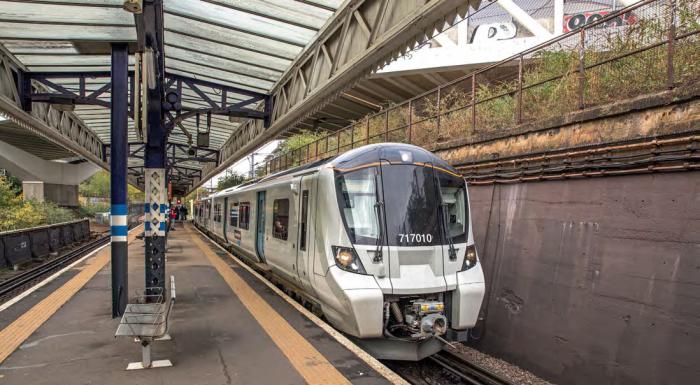 Still on tripcocks: new Siemens-built Class 717 at Drayton Park on the Moorgate branch, where the voltage changeover from overhead to the third rail used in the central London tunnels takes place, on 24 October 2019. Implementation of ETCS will strip the Northern City line of the last vestiges of the signalling betraying the line’s history as part of the London Underground system. Ken Brunt

First call-off contract under the framework will cover the outline design for the installation of ETCS Level 2 on the southern section of the East Coast main line from London King’s Cross to Peterborough North plus a design, build and maintain contract for the Finsbury Park to Moorgate branch.

Siemens has also been announced as the winner of the Traffic Management Partner framework which has been procured as part of the ECDP. Procurement has been managed on behalf of the Routes and is based on the requirements of the York and Manchester Rail Operating Centres (ROC).

Two lots are covered by the TCP framework, the ECML resignalling and the Trans-Pennine Route Upgrade (TRU). Siemens has been awarded both lots. A full analysis of this deal can be found on page 24.

Completing the ECDP is a third framework contract for a Railway Systems Integration Partner (RSIP). The role will be to help co-ordinate the industry change in delivering the programme. The RSIP framework has been awarded to a consortium of consultants Atkins, Ramboll and PwC.