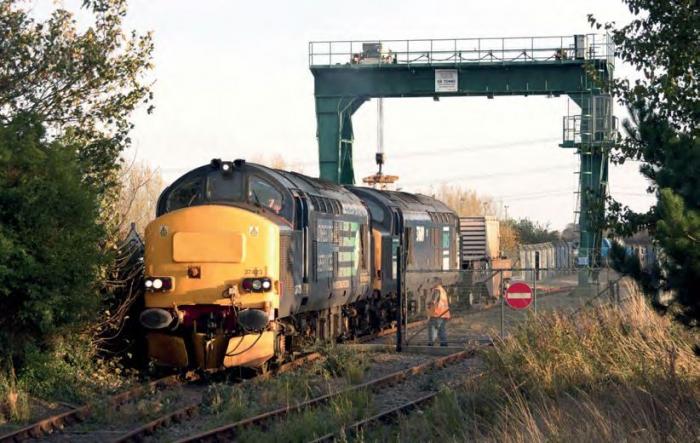 NNB Generation Co (SZC) Ltd, a joint venture between French and Chinese state-owned companies EDF Energy and China General Nuclear Power (CGN), is proposing the construction of the new nuclear power station on the Suffolk coast at Sizewell and public consultation on the proposal is now underway. The Sizewell-C power station would comprise two 1,670MW pressurised water reactors (as planned for the controversial Hinkley Point power station currently under construction in Somerset). The new power station would be located to the north of the existing Sizewell-A ‘Magnox’ power station, opened in 1966 and decommissioned in 2006, and the still-operating Sizewell-B pressurised water reactor opened in 1995.

Serving the former Sizewell-A power station site is the remaining section of the erstwhile Great Eastern Railway Saxmundham to Aldeburgh branch line, which links into the East Suffolk line at Saxmundham Junction. This line was cut back to Sizewell siding, where a gantry crane was installed to handle nuclear fuel-rod flasks, on 12 September 1966. Following the completion of decommissioning of Sizewell-A, the line is currently disused.

The Sizewell-C construction proposals for consultation involve either ‘rail-led’ or ‘road-led’ initiatives to deal with construction traffic. The reopening of the branch to Leiston for workers apparently has not been considered.

The favoured rail option currently proposed involves the construction of a new freight branch to be built from a junction with the existing branch west of Leiston and run to the north of the town to the construction site, where terminals for unloading construction materials would be built. The new line would be owned and operated by EDF.

There would be a 25mph speed restriction and the line is being planned for the operation of five trains each way per day, restricted to working hours. The existing branch would be relaid and the nine currently open or train-man operated level crossings would be upgraded. Upgrades would also be required to the East Suffolk line between Westerfield and Saxmundham, requiring a new loop near Wickham Market, the upgrade or closure of some 33 level crossings and the strengthening of six underbridges. A new branch crossover connection at Saxmundham is also proposed, to allow freight train standage clear of the passenger loop. These works would be undertaken by Network Rail and a potential risk to this option is seen as the ability of NR to deliver them on time.

If the favoured option is not selected, other options suggested are:

■ the remodelling of the existing crane siding at Sizewell and the extended sidings beyond (built in the 1980s for the Sizewell-B construction traffic to provide a terminal for road transfer to the construction);

■ a rail terminal constructed on the north side of the line short of Sizewell siding and level crossing, serving a transfer site on adjacent land. In the event of the road-led proposal going ahead, this rail terminal would be constructed and the branch upgraded, but no work would be done on the East Suffolk line, limiting rail traffic severely.

SZC is rather optimistically looking to gain approval for construction of Sizewell-C in 2020-21, with construction taking nine years and the power station going into operation in 2031. Should the full rail option be exercised, construction of the branch would start soon after approval of the project. It would be removed at the end of the construction work and the track bed returned to its current state. Iain C. Scotchman 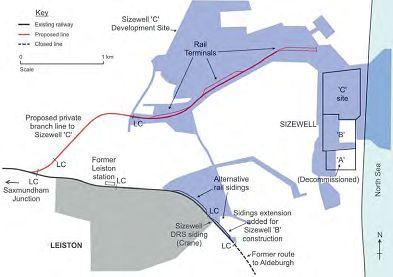