A NEW park-and-ride for the St Ives line in Cornwall that opened at St Erth station in the early summer has proven to be a boon for the branch. The facility, with upgraded car parks and a shuttle bus to take mobility-impaired passengers from the further car park to the branch platform, has replaced the former park-and-ride at Lelant Saltings, where much of the car park was unpaved and was muddy in wet weather. Tucked away on a peninsula on the North Cornish coast, St Ives is tiresome to reach by road and it is notoriously difficult to find a parking space in the resort.

‘The facility has been fully open at St Erth for the last four periods, and since it opened there has been a 28% increase in the number of journeys made on the line, up from 317,169 to 406,119’ reported the Devon & Cornwall Rail Partnership Manager Richard Burningham in early October.

‘It is easier for people to buy tickets now than it was at Lelant Saltings, with more options and facilities, and this is clearly a factor, but the main reason for the increase is that there are more than 2½ times more car parking spaces at St Erth than Lelant Saltings – 516 compared to 200.’ St Erth station is immediately adjacent to the A30, whereas the Lelant Saltings car park had unsatisfactory access down a side road in a housing estate.

Lelant Saltings now has a Parliamentary service and all trains now call at Carbis Bay (previously it only had an hourly service). There is a two-hourly service at Lelant. Lelant Saltings opened on 27 May 1978, just under 12 years after the line was reprieved by Transport Minister Barbara Castle. She reprieved the Looe line on the same September day in 1966 (but allowed the Padstow closure to go ahead).

In addition to the St Ives branch, Mr Burningham said the Cornish main line is doing well: the number of journeys allocated to local services made on the main line has increased by 21% since services were improved in the May timetable, from 344,879 to 416,575.

‘All bodes well hopefully for the full introduction of the Cornish main line improved service from December when there will be a near even-interval service between Plymouth and Penzance throughout the day, Monday to Saturday.’ 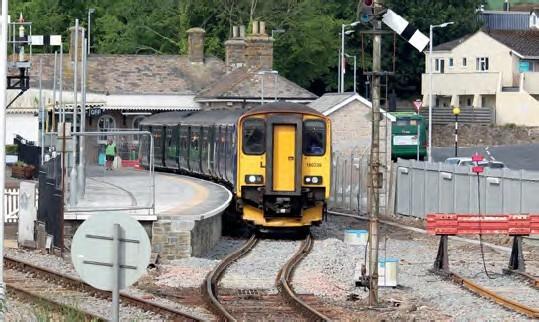 Bay platform: the St Ives branch train at St Erth on 16 June 2019. The platform used by this service has been widened and resurfaced as part of the improvement works. Craig Munday