SWR says the review has provided ‘a blueprint to help us improve performance’. The report was commissioned by SWR to establish why performance on the South Western has been in decline since 2011.

According to the operator the report identifies a number of factors causing a loss of timetable resilience and a degradation in service recovery capability. These include growing passenger numbers, the management of train crew, the operation of longer trains, increasing numbers of speed restrictions and ageing infrastructure. More recently the major works at Waterloo in August 2017 and the move of the joint control between Network Rail and the train operator to Basingstoke in early 2017 have exacerbated the situation.

SWR says following the report it has reviewed and changed arrangements for analysing performance and developing performance improvement plans and has begun a review of the control centre. It says it has taken ‘significant steps’ to address inherited shortfalls in driver route and traction knowledge and began recruiting additional drivers even before it took over the franchise. Operational recommendations include amendments to the professional driving policy such that drivers draw up sufficiently when approaching key signals in the Waterloo station throat when they are displaying red aspects in order to clear prior track circuits. 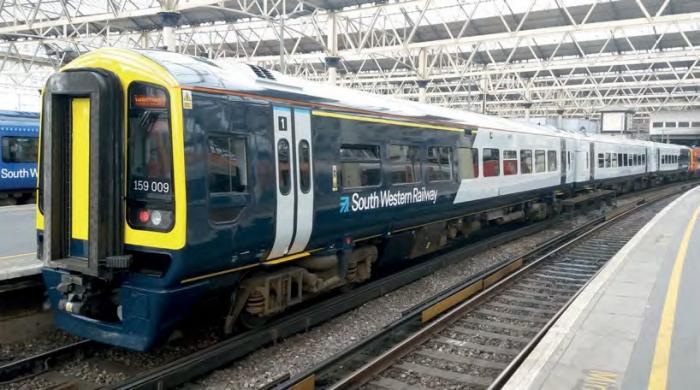 Transitional livery: SWR’s No 159009 has been outshopped in this variant on the operator’s new livery without the diagonal stripes seen on other units. It awaits departure from Waterloo on 5 September 2018 with the 16.50 service to Westbury.
Colin Scott-Morton

The operator adds that the report identifies the opportunities a consistent suburban fleet would bring, noting this was identified before the start of the franchise when SWR ordered 90 new Class 701 Bombardier Aventra EMUs, due to enter service from late 2019. Mr Holden’s report recommends SWR should ‘seek to achieve the maximum extent of Driver Controlled Operation possible’ with the new fleet.

On Network Rail’s part, SWR says the company has invested in technology to better monitor key assets and additional maintenance teams to respond to incidents faster and expects to have removed 60% of speed restrictions on the network by the end of the financial year.

SWR notes some of the recommendations are longer term and have funding implications, such as infrastructure improvements and reuniting some functions separated when Network Rail and previous franchisee South West Trains moved the control centre to Basingstoke. It says it is working through these with NR and the Department for Transport. Infrastructure changes proposed include seeking a solution to substandard overlap problems affecting trains using the former international terminal at Waterloo, and for NR to carry out a feasibility study into increasing the permanent speed restriction on the main suburban lines and into the former international platforms from 15mph to 20mph.