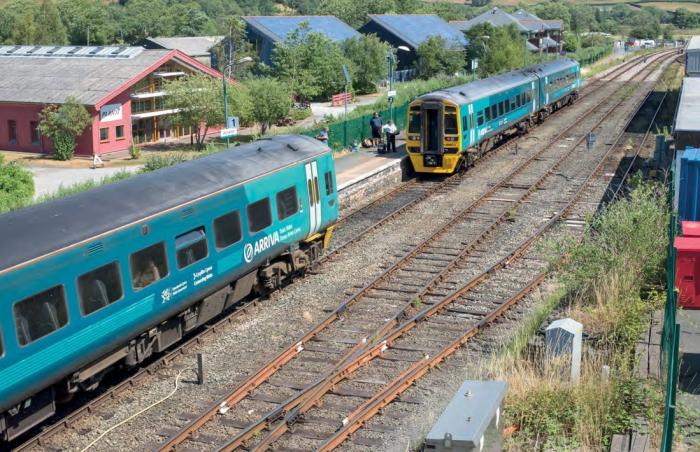 Staying power: Class 158s, fitted with ERTMS, will be retained until the final Civity DMUs are delivered. Two of the units are seen here at Machynlleth on 14 July. The Cambrian ERTMS control centre is out of shot on the right.
Rhodri Clark

FURTHER DETAILS of the innovative Wales and Borders rail operating contract have emerged as KeolisAmey prepares to take over from Arriva on 14 October. Transport for Wales (TfW), a company owned by the Welsh Government, awarded KeolisAmey a 15-year Operator and Development Partner (ODP) contract in June. The contract’s total value is estimated at £5 billion.

All of the fleet currently used by Arriva Trains Wales will be replaced, mostly with new stock from CAF and Stadler. The 77 CAF Civity DMUs, in two-car and three-car sets, will be introduced from 2021 to 2024 and will work most Wales and Borders routes, except local ones in South East Wales and Pembrokeshire and the Heart of Wales line.

At least some of the Class 158 fleet will outlast the newer Class 175 Coradia units in Wales because they are fitted with ERTMS (European Rail Traffic Management System) equipment for the UK’s pilot deployment. The Cambrian lines will be the last to receive an allocation of CAF DMUs.

TfW Rail Services mobilisation director Colin Lea, who is employed by KeolisAmey, told Modern Railways that the Cambrian ERTMS was a trial system and is now old. ‘We will be looking to upgrade that to the latest UK ERTMS but if we can’t, we have the ability for it to be backwards compatible. CAF will ensure that.’

TM ON THE MARCHES

While the Cambrian lines have ERTMS signalling, other parts of the network will use semaphore signalling for the foreseeable future, including the Marches line. Resignalling was planned for Control Period 5 but not undertaken; it is omitted from Network Rail’s renewals plan for CP6 (2019-24). The line hosts Wales and Borders’ flagship Cardiff-Manchester services, which will increase to five-car formations with first class accommodation in 2024. 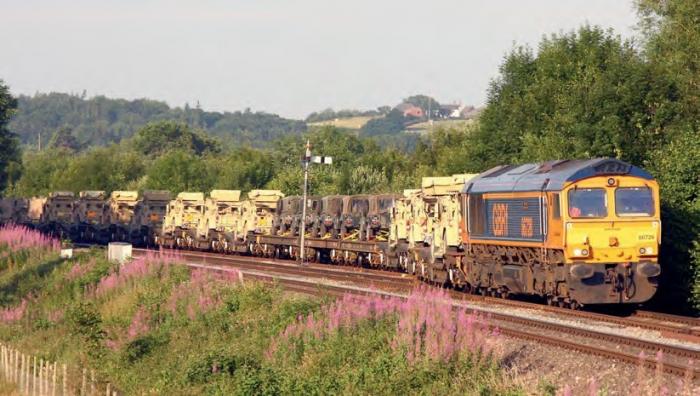 MoD in the Marches: on the Welsh border south of Hereford on 11 July 2018, loco No 66728 departs Pontrilas loop under the control of a semaphore signal. The loco was heading working 6Z84, the Pengam – Donnington army vehicles (the train originated as 6Z83, Warminster – Pengam).
Peter Squibbs

Despite the signalling’s antiquity, the plan is to extend the Traffic Management System (TMS) to the Marches line. Introduction of TMS to the Wales Rail Operating Centre will cover services in South Wales, but KeolisAmey wishes to capitalise on it for trains approaching Newport from Shrewsbury.

Mr Lea said that isolated TMS is not linked to the signalling but offers advice to signallers and controllers. ‘Cardiff is one of the locations for early TMS roll-out, covering the South Wales area. We want to make sure that we make the best of that investment by Network Rail.’ One of the expected benefits is faster and better responses during disruption. TMS will assist the reallocation of crew and stock diagrams, taking into account factors such as their current positions and the hours remaining before each driver must stop work.

‘We’re also going to extend the use of TMS up the Marches line, which will mean that some of the trains coming into the South Wales traffic management area will be more easily regulated, because we’ll be controlling them from further out’, said Mr Lea. He revealed that this represents a £20 million investment by TfW and KeolisAmey which is justified by the expected improvements in productivity and reductions in passenger disruption.

‘The railway is miles behind other industries in this area. If you look at Heathrow and how they deal with disruption, they slow planes down that are over the Atlantic to hit a slot to land at the airport.’

TfW required bidders for the contract to commit to fitting GPS (Global Positioning Satellite) devices to all trains. ‘I’m absolutely astonished that there’s no current system which will tell you precisely where a unit is’, said Mr Lea. ‘We know there’s a unit going between certain track circuits but don’t know what unit that is unless we cross-refer it with a piece of paper created by someone sometime in the morning.’

GPS underpins the future Wales and Borders performance regime. Passenger Time Lost (PTL) will replace the Public Performance Measure, which is based on arrival time at the train’s final destination. PTL will record a train’s punctuality at numerous locations along its route and will attach less weight to lightly loaded trains than to the busier services. For staff and passengers, trains should become more visibly punctual at every station in normal service.

‘It’s designed to measure the impact on passengers’, said Mr Lea, cautioning that it will take some time to revise timetables to remove the PPM buffers at the final destinations of trains in current timetables. He predicts that PTL will remove the incentive to turn trains around short of their destinations. However, it is conceivable that it could sometimes incentivise turning trains short, for example where the unit’s next duty serves a peak commuter flow.

The frequent shuttle between Cardiff Bay and a dedicated bay platform at Cardiff Queen Street, which bolsters the PPM statistics, will be retired, to be replaced by through running from the Bay to Pontypridd and beyond. This will introduce many additional conflicting moves at Queen Street, where Bay services will cross the path of services on the Rhymney-Barry axis. The area was resignalled by Network Rail recently, in tandem with reopening of two additional platforms, but further resignalling and track alterations are planned to support the future service. Another factor is that interchange at Cardiff Central will be lost for services undergoing this switch.

The alterations will be delivered by TfW Rail Service and TfW’s Infrastructure Delivery Partners, which are soon to be appointed. The Core Valley Lines (lines north of Cardiff and the Bay branch) are planned to be transferred from Network Rail to the Welsh Government by autumn 2019, subject to regulatory and financial approvals between the two governments. Currently TfW Rail Services has 35 people surveying the assets in detail and designing the infrastructure for electrification and the frequency enhancements specified by TfW.

Mr Lea said vertical integration would allow the modernisation works to be delivered at lower cost and with less disruption for customers than if the Valley Lines had remained in Network Rail ownership. ‘We will inherit and use Network Rail standards initially, but in time we will be able to challenge these standards to improve efficiency and customer focus, whilst always ensuring safety.’ At the same time, the CVL will remain part of the national rail network, with through ticketing. Rhodri Clark