Talking to Chris Green at the Golden Whistles awards, he mentioned that Class 700 reliability was climbing and was nearing 15,000 Miles per Technical Incident (MTIN) for the last couple of Reporting Periods. True, but in the Golden Spanners we use Moving Annual Average (MAA) data when awarding the trophies because, even with a well-run fleet, you can get good and not so bad periods.

But Mr Green had set me thinking. Could an analysis of Period MTIN figures tell us anything? Figure 1 was the result and I think you can extract some meaning from it – although one must always beware of confirmation bias.

Note that the chart is pretty random up to Period 5 (22 July – 18 August), but then we have three periods of stability around the 11,000 MTIN mark. My theory is that this followed a successful software drop. In the two most recent periods, there has been a further step up to around the 14,000 MTIN mark. Period 11 will be the test of whether my theory is correct.

Reliability is, of course, inseparable from availability. With the 8 December 2018 timetable change, at the start of Period 10, the Class 700 fleet of 115 units had to step up from 86 unit diagrams to 101 overnight. This represented an increase from 75% to 88% availability.

Not that 88% availability is particularly demanding. The real test will come with this year’s May timetable when 106 unit diagrams (92% availability) will be needed to sustain 20 trains per hour through the central core.

Encouraged by the apparent sense in the Class 700 chart, I ran a similar analysis for the Great Western Railway Class 800 fleet.

As Figure 2 shows, this is not so straightforward. The dip is clearly the spate of overheating engines during the hot spell, with a rapid bounce back following an enhanced cooler group maintenance regime. And I attribute the recent improvement to the increased mileage being run on electric traction following energisation to Bristol Parkway at Christmas.

My chums at Hitachi are getting quite chipper about overtaking the Class 700s in the TIN-watch Table of Truth. Period 11 will reveal whether my theories and Hitachi’s expectations are fulfilled.

2019 I suspected that last month’s extended analysis of new train deliveries would get me into trouble with operators complaining that I had been too kind on Siemens and Hitachi for at least getting all their Class 700s and Class 800 fleets into service, albeit a few months late. But, so far, no flak from Govia Thameslink or Great Western Railway. 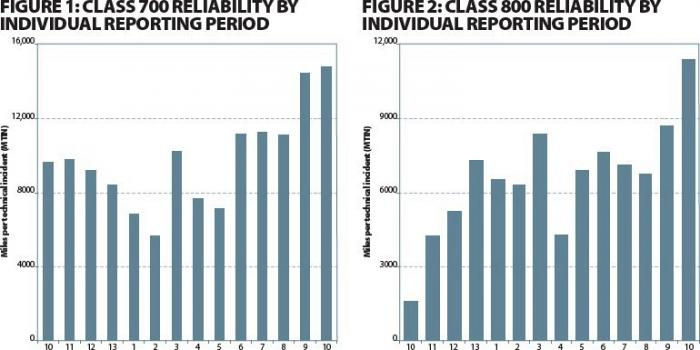 However, the Scots were distinctly peeved by my generosity towards Hitachi’s Class 385 delivery record. And I must confess to being guilty-as-charged.

When filling in my original database I listed service entry as ‘from September 2017’. Prodded by Transport Scotland, I went back to the original announcement, which said that the first 24 trains would be in service from late 2017, which is a very different matter.

Obviously delays to electrification works meant that the trains could not have run at that date, but, as a Transport Scotland chum reminded me, with some asperity, although the Class 385s are now in fleet service, the programme is now some 18 months late.

Incidentally, despite some chasing, the Class 385s are still noticeable by their absence from the monthly Fleet Challenge reliability statistics. We need some new blood in TIN-watch