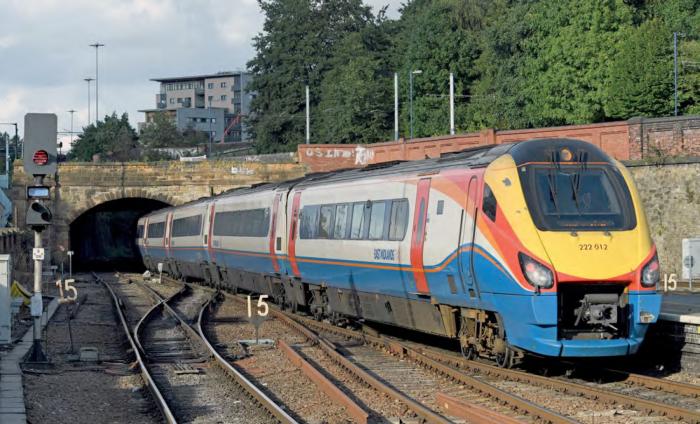 Franchise up for grabs: a Meridian at Sheffield, 16 September 2016.
Paul Bigland

THE DEPARTMENT for Transport has announced that Arriva and a joint venture between FirstGroup and Trenitalia will compete with incumbent operator Stagecoach to run the next East Midlands franchise.

The franchise, which is set to begin in November 2018, includes inter-city services to and from London on the Midland main line and a range of regional services. Stagecoach has operated the franchise since it was formed in 2007 by combining the Midland Mainline franchise and elements of the former Central Trains operation. The company currently operates it under a direct award agreement running until March 2018, although DfT plans to extend this until November in order that the franchise change should take place after a major blockade at Derby for remodelling and resignalling of the area around the station. In the franchise prospectus, DfT says the franchise length would be between seven and 15 years, with an optional extension also a possibility.

DfT says ministers are seeking to improve ‘the quality, frequency and timings of journeys on the east of the franchise network’ and to ‘develop new services and connections’.

It adds that the new franchisee will be expected to ‘satisfy predicted growth in demand, in particular into London St Pancras, but also for local crowded services like Derby-Crewe’. Current plans envisage the introduction of a sixth hourly long-distance path into St Pancras in December 2019, which would be used by an additional service to and from Corby. With electrification from Bedford to Kettering/Corby also due for completion by this date, Corby services would then be operated by electric rolling stock.

FirstGroup and Trenitalia announced in January that the companies would form joint ventures to bid for both the East Midlands and West Coast Partnership franchises.

First holds 70% of the equity in each venture and Trenitalia the remaining 30%. Trenitalia is the most recent entrant to the UK rail market, having acquired the c2c franchise from National Express.