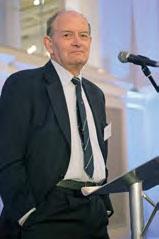 Like the other ‘Informed Sources’ Laws, the 1st Law is based on over half a century of empirical research. It was first postulated under British Rail, but privatisation has brought a new wealth of confirmatory evidence. Readers should note that in this context ‘railways’ embraces all those who influence, as well as implement, railway policy, including transport ministers, civil servants and regulators, among others.

A classic example of the 1st Law’s powers had been Network Rail’s attempts to procure a Traffic Management (TM) system. Yes, I know I have been banging on about this for over a decade, but the timescale alone vindicates the 1st Law.

Procurement of TM for the Eastern Region and London North Western Route seemed to be heading for yet another triumphant corroboration of the 1st Law. Yet the outcome delivered a stern reproof to this column’s institutionalised cynicism. 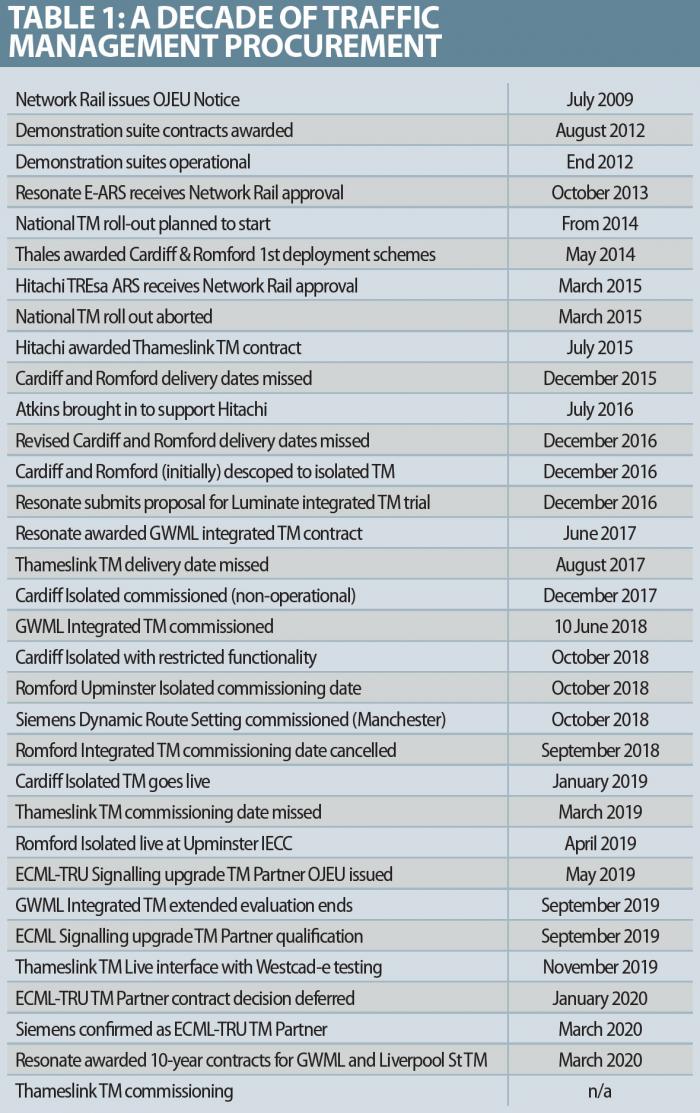 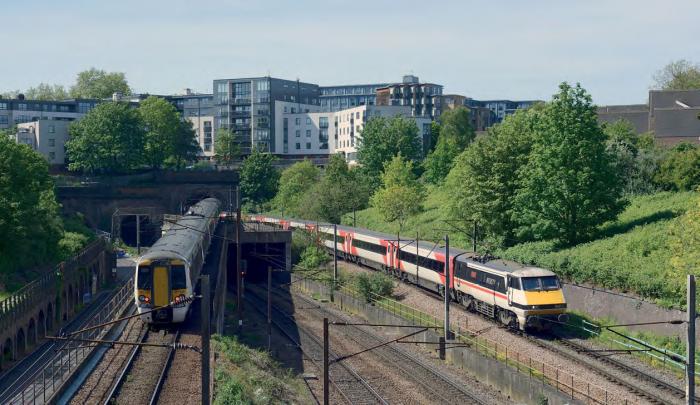 In May 2019 NR published an OJEU Notice seeking expressions of interest from ‘partners’ to provide TM systems for two schemes. One was the East Coast main line resignalling, the other the Trans-Pennine Route Upgrade (TRU).

Both TM systems had to ‘technically integrate’ with each other in the middle of the Pennines. Estimated values were: Lot 1, £108 million, and Lot 2, £72 million.

According to the OJEU four candidates were expected to qualify. In the event there were seven expressions of interest, from which five potential suppliers went forward.

Time for a quick review of the form of the runners and riders in the 2019 TM Partner Handicap.

Alstom was, of course, one of Digital Railway’s ‘Favoured Three’ who shared £21 million to develop demonstration suites under the original 2009 TMS procurement. Despite the Iconis demonstration suite being just down the road from me, procurement moved on before I got to play with it and Alstom faded from the UK TM scene.

Indra of Spain was another from the 2009 forlorn hope. The company’s DaVinci TM has been installed on all the Spanish high-speed rail network. In 2018 a joint venture of Indra and Siemens won a contract from railway infrastructure manager Adif to develop a traffic control and management system, known as Sitra+, for the entire Spanish rail network.

DXC of the United States with Swiss Federal Railways (SBB) was the combination notable by its absence from the 2009 line-up. Developed jointly, the TM system has been in service with SBB since 2009 and claims some impressive statistical credentials.

According to informed sources, SBB/DXC was in consortium with Tracsis – which would provide some UK experience (‘Informed Sources’, November 2019). However, in the end they did not bid.

Regular readers of this column will know all about Hitachi, Resonate, Siemens and Thales and their respective track records.

Two early fallers were Hitachi and Resonate. Here was the 1st Law emerging. While disqualifying the only firm in the world to have a fully Integrated TM proven and in daily service on its network, plus one of the Favoured Three, the Network Rail procurement team was happy to shortlist other companies with zero or limited experience of UK signalling and control systems.

Equally, the procurement process, as I understand it, means a buyer can’t say ‘You made a right Horlicks of your last contract, so goodbye and thank you’. No names, no pack drill, but three years late, 100% over budget and de-specced to the most basic form of TM, meets the criteria for a ‘Horlicks’ in BS:9009 to me.

After I wrote up the aspirations of East Coast Digital Programme (ECDP), which also included procurement of European Train Control System (ETCS) between King’s Cross and Peterborough plus a programme integration partner, Programme Director Toufic Machnouk got in touch to explain that the TM component was separate to the ECML South resignalling, which was the central feature of the scheme. In effect ECDP was managing procurement of the TM on behalf of the Routes and their Rail Operating Centres (ROC).

This was to be hugely significant in determining the outcome. As explained below, successful TM depends on integration between the TM software and the control system which implements the TM outcome. In retrospect the original TMS procurement was doomed from the start, because Network Rail believed TM was a ‘product’ you could buy off the shelf and install in your signalling and control centres.

HERE’S WHAT WE WANT

Network Rail (NR) requires a Traffic Management Partner (TMP) to work collaboratively within its Eastern Region, and a TMP to work collaboratively within the London North Western North (LNW North) Route of the LNW Region, to achieve NR’s long-term strategic vision for Traffic Management. Notice in the Official Journal of the European Union, 15 May 2019

What the trial of Resonate’s Luminate TM on Great Western demonstrated is that for TM to be effective it needs to be treated as an upgrade to an existing control system. Thus a key consideration was the control system installed at the ROCs concerned, namely Manchester (Siemens’ Westcad), Derby (Westcad) and York (Westcad and Resonate IECC Scalable).

Note that the TMP contracts are ‘empty frameworks’ to be populated with contracts as the business case can be made. As we know from Great Western it is proving very hard to link improved performance, which can be monetised, to TM.

TM was promoted initially for its ability to predict and manage major disruption across the network. Great Western’s experience with Luminate has shown that while the use of offline plan and re-plan during disruption is valuable, the real benefit of an Integrated Traffic Management system lies in the ability it gives signallers to implement the many small interventions which turn good performance into excellent.

Sub-threshold delays – under three minutes – have long been a major concern to operators as the railway has become busier. TM could be the key to reducing them. Less glamorous than preventing an incident at Newcastle disrupting services at Reading hours later, but providing a 24/7 benefit.

So hats off to Toufic Machnouk and his team who, taking a user-centred approach to TM, came up with the logical decision to award both TM Partnership contracts to Siemens, which had control equipment in the key ROCs. Given the major players on the shortlist, this must have taken some intestinal fortitude.

According to informed sources there were some vigorous protests, but no-one mounted a formal challenge. I got my ears bashed, with informed sources pointing out Siemens has yet to demonstrate a working TM system on the UK network, the experience to date being limited to interfacing with the Hitachi Tranista TM for Thameslink.

As reported in ‘Informed Sources’ (January 2020), Siemens is developing its own TM upgrade known as Dynamic Conflict Resolution (DCR). The pilot application, covering selected Westcad workstations at Derby Rail Operating Centre (ROC), is due to be installed shortly, with trials staring later this year.

Now it is up to the ROCs to develop incremental improvements to their Westcad control systems with Siemens. To go ahead, these will have to make a ‘robust’ business case.

But as the two Resonate contracts for Great Western and Anglia show, TM supplied as an enhancement to an existing control system, rather than a new ‘multi-million computer’, is not costly and might even be affordable from Operating Expenditure. The corollary of the new approach is that Siemens and Resonate can now negotiate further deals to roll out TM for control centres with Westcad and IECC Scalable respectively.

In which case, where does this leave control centres with MCS workstations? These were supplied by General Electric (GETS), which was acquired by Alstom.

Subsequently Alstom has developed the ‘MCS Infinity’ workstation, which combines touch screen panels with wrap-round display screens. An installation is being trialled on an MCS desk at Three Bridges ROC.

However, adding TM could be problematic since Alstom’s Iconis TM is an integrated supervision and control system which includes what Alstom calls Automatic Train Path Management. Adding TM to MCS workstations as an enhancement is debatable.

Especially as TM is only as good as the Automatic Route Setting (ARS) supporting it. Alstom has inherited an interest in the Hitachi TREsa ARS available with the MCS workstations, since GETS jointly funded this application.