DESPITE THE developing coronavirus situation, the Manchester Metrolink extension to the intu Trafford Centre opened as announced on 22 March.

The 5.5km line opened seven months ahead of schedule. It leaves the existing network at Pomona and serves six new stops at Wharfside, Imperial War Museum, Village, Parkway, Barton Dock Road and intu Trafford Centre. Transport for Greater Manchester confirmed consideration had been given to deferring the opening, but it was felt the route would help support connectivity across Greater Manchester at a time when other modes would also be reducing their provision.

Announced in 2016, the £350 million line was designed and constructed by the M-Pact Thales consortium comprising VolkerRail, Laing O’Rourke and Thales, with WSP acting as TfGM’s delivery partner. The project was the first to benefit from the region’s Devolution Deal, signed by Greater Manchester leaders and central government in November 2014, with a £20 million contribution from Trafford Council.

Discussions about the provision of a light or heavy rail link to the Trafford Centre itself have been a recurring feature. One option examined and dismissed was the conversion of the abandoned heavy rail line to the Barton Dock freight terminal, adjacent to the Trafford Centre. Whilst this would have provided a quick link into the city centre, it would not have served any other locations and would have added yet more services through the congested Castlefield corridor.

Waiting for football crowds: the extensive queueing facilities at the Wharfside stop on the Trafford Centre extension, which is close to the Old Trafford football stadium, seem unlikely to be used for some time. Here a tram bound for intu Trafford Centre calls on the first day of passenger service on the new line, 22 March.
Tony Miles

The Trafford Park line runs through Europe’s largest industrial estate, providing access to thousands of jobs, including global brands such as Kellogg’s, Unilever, Missguided, L’Oreal and Adidas. As well as the intu Trafford Centre the new line serves other key leisure destinations, including the Imperial War Museum North and the Old Trafford football ground. The latter is served by the Wharfside stop, where extensive crowd management and queueing systems have been provided, matching those at the Old Trafford stop on the line to Altrincham. A crossover to the east of the stop will allow additional trams to serve the stop and provide a shuttle service into the city centre if required.

The line also passes the site of ITV’s new Coronation Street set where it was feared the tight 90-degree turn from Trafford Wharf Road to Warren Bruce Road could see loud ‘flange squeal’ which would impact on filming of exterior scenes. In 2015 tests commissioned by ITV suggested noise and vibrations from trams rounding the curve and announcements from the public address at the nearby Imperial War Museum North stop would be disruptive. Initial observations are that solutions put in place during construction have ensured this is not the case. 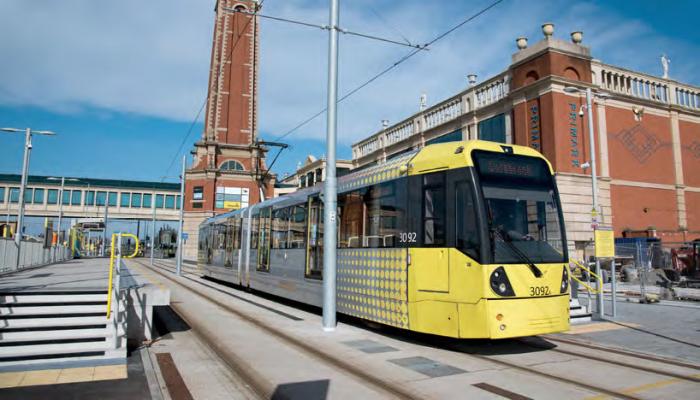 Shopping centre link: tram No 3092 heads away from the intu Trafford Centre calling at the first stop on the extension, Barton Dock Road, on 22 March.
Tony Miles

A 12-minute frequency was planned on the new route prior to cuts in service due to coronavirus. Trams are initially running to and from Cornbrook, where passengers can change onto trams serving all destinations on the Metrolink network. Delivery of the final order of 27 additional M5000 trams, expected to join the existing fleet of 120 sets later this year, will eventually enable services to be extended through the city centre to Crumpsall, where a new turnback platform has been constructed.

Plans remain on the table for a further extension of the Trafford Park line as far as Port Salford, the freight terminal constructed on the banks of the Manchester Ship Canal in Salford which opened in 2016. This extension would also serve Bridgewater Circle, Trafford City (site of the ‘Chill Factore’ indoor skiing and snowboarding centre), Salford City Stadium (home to Rugby Super League’s Salford Red Devils and Aviva Premiership’s Sale Sharks) and Port Salford itself. Passive provision for a single-track line is included on the western side of the new lifting bridge over the Manchester Ship Canal on the Salford Western Gateway road.