KEY LANDMARKS have been reached in the construction of the £350 million Manchester Metrolink Trafford Park line, which is due to open in the first half of 2020.

On the night of 10 November the first test tram operated over the extension from the junction with the existing network at Pomona to Warren Bruce Road. This followed the final concrete pouring of the project on 5 November on a 15-metre stretch of track near to the ITV Coronation Street set. Two days earlier, travel restrictions on Trafford Wharf Road were lifted, returning the road to two-way operation for the first time in 2½ years, during which it was made one-way eastbound only to allow utility and construction work to take place.

During construction, the 4.5km of highways that run alongside the track have also been improved or renewed and an additional 4.2km of cycling lanes have been provided, doubling the existing provision.

The Trafford Park Line runs to the intu Trafford Centre with six new stops along the 5.5km route. 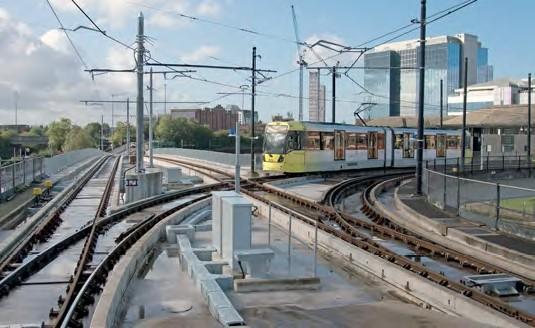 Straight on for Trafford Park: a tram passes over the junction with the Eccles line on 8 October 2019.
Tony Miles