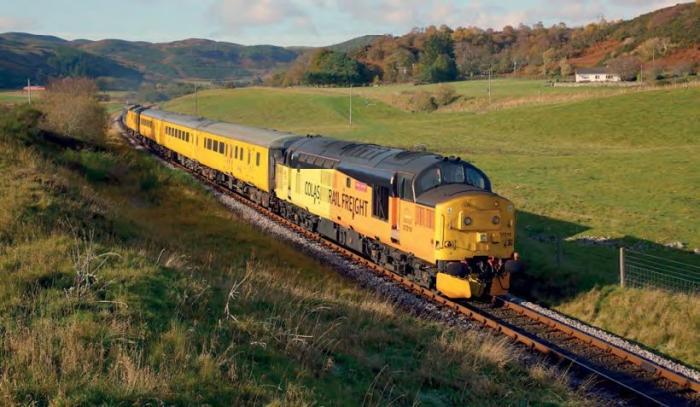 Locos on the Far North line: Nos 37219 and 37610 top’n’tail an Inverness Milburn to Thurso and Wick departmental working at Rogart on 28 October 2018.
Jamie Squibbs

TRIAL OPERATION of a sleeper service on the Far North line should take place for between 12 and 18 months to assess the long-term viability of a potential service, according to a report from SNC-Lavalin.

HiTrans, the Highlands and Islands Transport Partnership, has been promoting the concept of a sleeper linking Thurso to Edinburgh and Glasgow under the banner Midnight Train to Georgemas (p65, October 2017 issue). The study suggested a trial should utilise Mk 2 and Mk 3 carriages cascaded from Caledonian Sleeper services, with a review of rolling stock options for any long-term service undertaken. However, the study notes action must be taken soon to secure availability of these carriages should a trial proceed.

Should a trial operation be successful, the study outlines two long-term options – refurbished or new coaches. If new stock were to be procured, it recommends a follow-on order to the Mk 5 carriages built by CAF for Caledonian Sleeper, but with the addition of a Driving Trailer vehicle as supplied to TransPennine Express for its loco-hauled Mk 5A formations, with the potential for including a secure area for transport of light freight items. In the case of refurbished stock, it is suggested Mk 3 driving van trailers and seated coaches could be sourced from those operating with Greater Anglia.

For a servicing facility in Caithness, three possible locations are suggested, with the old Motorail siding at Thurso station emerging as the preferred option, and further study recommended into installation of temporary facilities here for a period of trial operation. Other sites considered included the Direct Rail Services facility at Georgemas Junction or unused roads at Wick.

Various service patterns are being considered for the service, with one option including attachment and detachment of a portion of the train at Inverness. This is being considered to provide a northbound service connecting with the current sailing time of the early NorthLink ferry to Orkney while still providing an option for Inverness passengers to remain on board until breakfast time. Should this be pursued, servicing facilities would also be required at Inverness, with the need to obtain a depot access agreement for this to take place at the current facility.

Also considered are potential operators for a service, with Serco Caledonian Sleeper, Abellio ScotRail, Rail Operations Group, Direct Rail Services and FirstGroup consulted as part of the study, although the study says this list is not exhaustive. It notes the operators considered expressed an initial interest within the timeframe of the feasibility study, but suggests for the trial period the operator should be one with prior experience. of running sleeper trains.

Vivarail is proposing the use of a battery-powered Class 230 to provide a shuttle service between Thurso and Wick.

The company presented the proposal at the Friends of the Far North Line annual general meeting and conference in June. Vivarail’s scheme would involve using a ‘230’ fitted with batteries, with one of the company’s charging stations provided at one end of the route to power the train (the battery ‘230’ and charging station recently picked up a prize at the Railway Industry Innovation Awards – see page 82).Campaign groups including the Friends are keen on running a trial shuttle service to assess potential demand.