THE FREIGHT branch from Yate to the quarry at Tytherington in South Gloucestershire, disused for the past four years, is being resuscitated as a result of buoyant demand for aggregates. The last workings at the quarry were early in 2013, when scalpings were brought in by rail from the Mendips for blending for road asphalt use.

Berks & Hants-style jumbo trains of up to 42 wagons at a time are planned. There is a 1 in 59 gradient up to the quarry, so only 21 empty wagons are permitted at a time. Trains will thus be broken in half, with the first half moved to the headshunt (a mile or so from the line’s original terminus at Thornbury) after loading, to await rejoining with the second half after that has been loaded. A trial train visited Yate in early June for clearance tests near the junction with the branch. Richard Giles 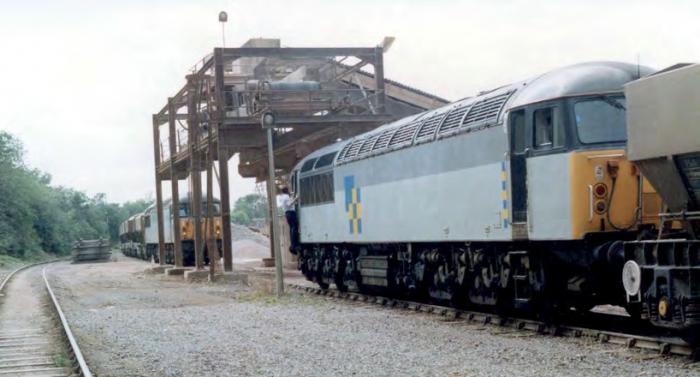 Cleared of vegetation: this is the headshunt, where vegetation that had built up over many years has been cleared. This is set to be lifted and relaid to make it suitable for heavy aggregates workings. Richard Giles

The way it was: this is Tytherington quarry on 27 June 1990, with loco No 56043 drawing empties towards the loader. Behind the loader, No 56001 is propelling a loaded train back into the headshunt prior to setting off towards Yate. Richard Giles, with permission from ARC