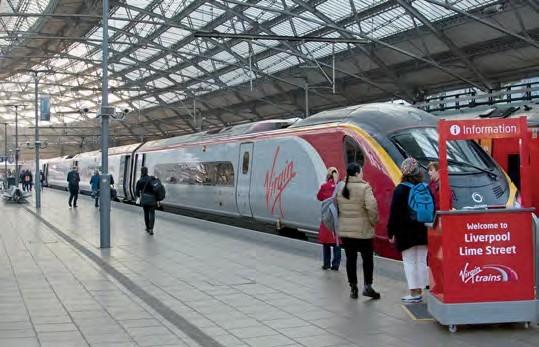 VIRGIN TRAINS has applied to the Office of Rail and Road to operate a new open access service between Liverpool and London from May 2021.

The services would be operated by a partnership of Virgin, Stagecoach, SNCF and Alstom. The former three companies had been bidding as a joint venture to operate the new West Coast Partnership franchise, but it was revealed in April that the consortium had been disqualified from the competition due to non-compliance concerning pensions. The venture has since launched legal action against the Department for Transport concerning the disqualification.

The application covers operation of 24 services per day at an hourly frequency between London Euston and Liverpool Lime Street, with calls planned at Lichfield, Tamworth, Nuneaton and Liverpool South Parkway. This comprises 13 down trains departing Euston hourly from 06.36 to 21.36, and 11 up trains from Lime Street between 08.13 and 20.13. Virgin’s aspiration is for a journey time of less than 2hr 30min, including station calls. Rolling stock is expected to be shortened Class 91/ Mk 4 sets released from LNER.

Trains would be reservation-only, guaranteeing all passengers a seat, with a full refund provided to passengers if disruption prevents this.

Virgin says every ticket would be at least 10% cheaper than the equivalent offered by rail competitors, with automatic delay repay compensation.

Free Wi-Fi and entertainment would be provided along with an at-seat, on-demand catering service.

Virgin says the new service would be expected to generate around £50 million of revenue each year.

Meanwhile, Virgin has announced plans to launch a new price-guarantee app by the end of the year. It promises an Oyster-style fares cap to work out the cheapest fare for a journey, including a split ticketing function to calculate if a cheaper combination of fares is available. Virgin says the development will particularly benefit passengers who mix peak and off-peak journeys, enabling someone with a peak time return who travels off-peak to pay a lower fare. Fare capping will also adopt weekly season ticket prices if these are cheaper than the cost of multiple individual journeys. The system is subject to industry approval and is planned to go live by the end of the year, although rollout on London Underground and Overground routes will take a year longer while necessary ticket-scanning technology is introduced.

■ GO-OP Co-operative is seeking to introduce a new open access service in December 2020 from Cheltenham/Newport via Swindon, Westbury and Castle Cary to either Exeter St David’s or Dorchester West. Its notification to the Office of Rail and Road says services would run no more than every two hours and be operated by ‘Class 158 or similar, subject to confirmation of availability’.