Certification is not enough

I had intended to follow up my review in the January column covering the technical failings revealed in the Rail Accident Investigation Branch (RAIB) investigation into the Waterloo derailment with an analysis of the wider issues the report raised. However, the detail in my preview of new train deliveries (or not) scheduled for the coming year pretty well filled my page allowance for February, and Waterloo had to be held over.

With hindsight this was not a bad thing, as it meant I had to read the report again to get back up to speed. This further reading only heightened my concerns which, to judge from my e-mail inbox, are shared by many readers. That Waterloo resulted in only some bent metal, rather than death and injuries, reflected the favourable location and should not be allowed to minimise concern over the incident. As the RAIB report makes clear, the accident happened because of multiple failures to follow the panoply of processes put in place after the Clapham accident in 1988.

To recap: as a result of ‘uncontrolled’ wiring added to the signalling system at Waterloo, the points were positioned incorrectly, allowing the departing train to collide with wagons parked on the adjacent line.

This wiring was added, without the safeguards required by Network Rail signalling works testing standards, to overcome a problem encountered while testing signalling system changes associated with the Waterloo capacity project.

A test desk was being used for the testing. However, alterations were subsequently made to the signalling system after the desk was designed. To work round this problem the tester added the uncontrolled wiring, which remained in place when the line was returned to service. This allowed the route to be set and the train signalled, despite the points not being detected.

A separate decision to secure the points in the correct position had not been implemented.

This situation, notes RAIB, arose because ‘competence management processes operated by Network Rail and some of its contractors had not addressed the full requirements of the roles undertaken by the staff responsible for the design, testing and commissioning of the signalling works’. And that is why we should be worried by Waterloo.

Running through the report is RAIB’s concern about ‘soft issue’, defined as the ‘depth of knowledge and the attitudes needed for signal designers, installers and testers to deliver work safely’. The recommendations to the two contractors call on them to seek development and monitoring of ‘non-technical skills’ among those working for them.

RAIB explains that competence depends on knowledge, skills and attitudes and includes both the technical and non-technical skills needed to undertake a job role. Non-technical skills are the ‘social, cognitive and personal skills that can influence the way that individuals undertake technical tasks’. A good understanding of the principles that underpin the mandated procedures being followed is essential for staff to properly appreciate the consequences of the actions they take.

In the case of Waterloo, RAIB says that the actions of the Functional Tester, Contractor’s Responsible Engineer (CRE) and the Project Engineer ‘indicate that appropriate non-technical skills were not applied’.

Having joined the railway in 2002, the Functional Tester obtained IRSE licences and certificate of competency for Verification Tester and Functional Tester in November 2003 and October 2004 respectively. As with the CRE, an experienced man: he had been working on the Waterloo project since 2015.

However, his certificate of competency for verification and functional testing had been revoked in 2012. This followed an incident in which he had signed off testing of points as complete, based on an assurance by another person that it would be completed at an appropriate time.

He was working for another firm at that time, but his new employer provided a development action plan to restore his revoked certification. This plan included the need to address his ‘soft skills’: however, the methodology in the development plan referred only to technical skills. 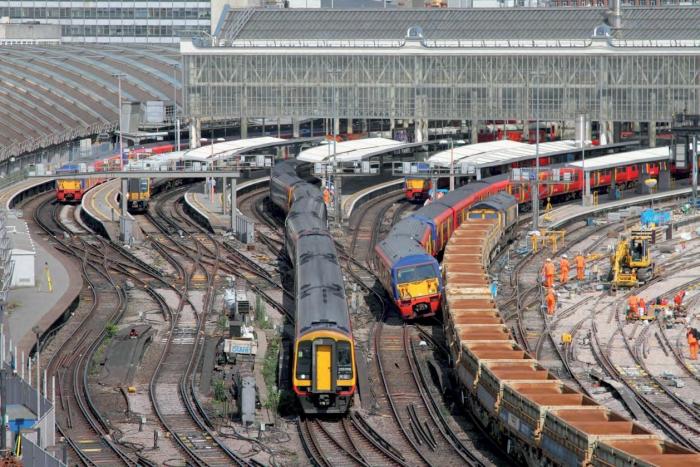 This development action plan was accepted by the then Network Rail testing and commissioning project engineering manager. The current holder of this role told RAIB that he would have expected ‘soft skills’ to be addressed by mentorship. However, there was no formally recognised method to address this element of the development action plan.

So you can see that despite all the good intentions of the post-Clapham controls, processes weren’t being followed.

Take the failure to clip the points, for another example. The CRE prepared a ‘Splitting of Design Methodology’ document intended to help the testers by identifying the activities that could only be undertaken when the blockade was extended by possessions.

It identified a list of points to be secured that was signed as accepted or authorised by six senior members of project staff from the Wessex Capacity Alliance (WCA), including Network Rail. The list included the three point ends involved in the accident – 1524A, 1524B and 1524C.

Securing points, including the three 1524 point ends, was included in a risk workshop. The associated action was initially allocated to the Tester In Charge (TIC), but the subsequent risk register showed the ‘owner’ as ‘project team’ with the TIC to supply the padlocks. No named individual was identified as responsible for securing the points.

Meanwhile, possession management staff had been asked to secure only points required by the railway Rule Book to protect the blockade. These requirements did not include the points on the blockade flank, such as 1524 points.

But, separately, an e-mail from a project manager asked for points that would be under the engineering train acting as a barrier between the working railway and the works area should be secured to protect against inadvertent movement while the track circuits, which would normally prevent them moving, were disconnected. As a result, 1524C points were secured, but not 1524A and 1524B. There are more examples of failures of process in the report, but I hope the point has been made.

After such a damning report I was underwhelmed by RAIB’s three recommendations. The first, addressed to Network Rail, says steps should be taken to reinforce the attitudes and depth of understanding needed for signal designers, installers and testers to apply safely their technical skills and knowledge.

This should include education of existing staff, managers and new recruits, ‘to promote a better understanding of industry processes, and an improved understanding of how the lessons learnt from previous accidents have shaped today’s good practice’. Processes for the assessment, development and ongoing monitoring of non-technical skills should be enhanced and measures taken to monitor and encourage compliance with process and safe behaviours on projects.

Each of the contractors involved, OSL Rail and Mott MacDonald, has been given recommendations on enhancing training in soft skills plus, in the case of OSL, enhancement of the skills needed for effective communication and safe decision-making in complex project environments.

There are also some ‘learning points’. These focus on the importance of signalling design, installation and testing staff ‘at all levels’ understanding why the processes established in the wake of Clapham must be followed. The importance of providing up-to-date signalling documentation, for example in relay rooms, is stressed. Any superseded versions ‘should be clearly identified as superseded’, says RAIB.

To someone who reported on the storm that swept through the signalling profession after Clapham, these recommendations and learning points do not seem proportionate to the fundamental shortcomings exposed by the incident at Waterloo