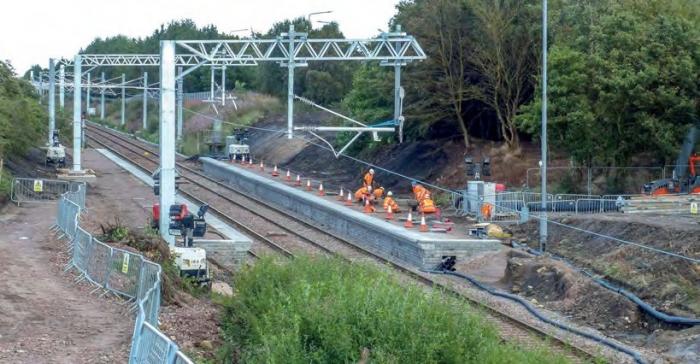 Shotts wiring: CPL is pushing on with the job. This is Breich station, as seen from the north side on 22 August 2018; staff from Story Contracting are at work on a £2.4 million rebuilding of the station, following former transport minister Humza Yousaf’s reprieve of the wayside halt from closure.
Ann Glen

NETWORK RAIL has confirmed that CPL Ltd, a fully-owned subsidiary of SPL Powerlines, will continue to work on the Midland main line and Shotts electrification projects.

The confirmation follows the acquisition by SPL of the shares in CPL previously held by Carillion, which went into liquidation in January. Around 200 former Carillion staff have been taken on by SPL since the beginning of April.

The total value of the two contracts is £320.5 million. The Shotts contract covers the fourth route to be electrified between Edinburgh and Glasgow in the Scottish central belt, with work due to be completed in March 2019, while the Midland main line deal covers electrification between Bedford and Corby.